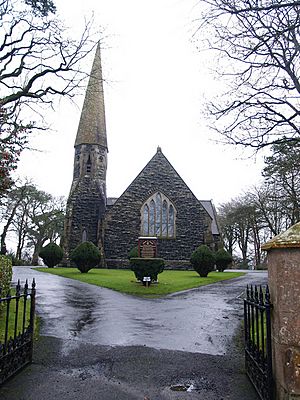 Ahoghill ( or from Irish Achadh Eochaille, meaning 'field of the yew forest') is a large village and civil parish in County Antrim, Northern Ireland, four miles from Ballymena. It is located in the Mid and East Antrim Borough Council area. It had a population of 3,417 people at the 2011 Census.

In early documents, Ahoghill is referred to as Magherahoghill meaning "the plain of the yew forest."

The 1859 Revival which swept through Ulster has strong connections with Ahoghill. Thousands, of ordinary folk had their lives changed at this time. Especially notable is the reports of men and women weeping in the streets of Ahoghill such was the palpable moving of the Holy Spirit. On Monday 14 March 1859 a thanksgiving service took place in the new First Ahoghill Presbyterian Meetinghouse at which some of the converts from Connor spoke. It was estimated that 3,000 people attended and the commotion was such that the minister ordered the building to be emptied out of fear of the crowded gallery giving way. The crowd spent upwards of three hours in the Diamond in the rain continuing in prayer and praise. The gallery of First Ahoghill [1] still bears the effects of this event; it is visibly sunken to one side! Today Ahoghill has three Presbyterian churches, First Ahoghill on Straid Road, Brookside (www.brooksidepc.org)on Brook Street and Trinity on Church Street. There is also St Colmanell's Church of Ireland on Church Street and the Gospel Hall on Glenhugh Road.

All content from Kiddle encyclopedia articles (including the article images and facts) can be freely used under Attribution-ShareAlike license, unless stated otherwise. Cite this article:
Ahoghill Facts for Kids. Kiddle Encyclopedia.