Nigel Worthington (born 4 November 1961) is a Northern Irish former professional footballer who was most recently the manager of York City.

He played a defender and a midfielder, playing his club football for Ballymena United, Notts County, Sheffield Wednesday, Leeds United, Stoke City and Blackpool. With Sheffield Wednesday he won the League Cup in 1991. As an international player, he was capped 66 times for Northern Ireland, and appeared for them at the 1986 FIFA World Cup.

Worthington began his managerial career as player-manager of Blackpool in 1997 before he took over as manager of Norwich City in 2000. He guided Norwich into the Premier League in the 2003–04 season as First Division title winners. He left just over two years afterwards, having failed to keep them in the top-flight in 2005. He was briefly caretaker manager of Leicester City in 2007 prior to starting as manager of Northern Ireland, from which he stepped down in 2011.

Born in Ballymena, County Antrim, Worthington played as a left-back and a midfielder and started his career with hometown team Ballymena United in 1979, where he was Ulster Football Writers Young Player of the Year in 1981. He moved into English football with Notts County on 1 July 1981 for a £100,000 fee.

Worthington signed for Sheffield Wednesday on 6 February 1984 for a £125,000 fee, and he stayed at the club for over 10 years. He earned promotion into the First Division with Wednesday in the 1983–84 season as Second Division runners-up. He was a member of the team that won the League Cup as well as a return into the First Division after finishing in third place in the Second Division in 1990–91. Two years later, Worthington and his teammates were losing finalists in the 1993 FA Cup Final.

Worthington left Wednesday to sign for Leeds United on 4 July 1994 for a £325,000 fee, spending two seasons at the club and one season at Stoke City, after signing on a free transfer on 18 July 1996.

Worthington's managerial career started as the player-manager at Blackpool on 8 July 1997. He soon retired from playing to take on sole managerial duties, but two and a half seasons in charge ended with his resignation on 23 December 1999 following a dip in form that saw the club lying in the Second Division relegation battle. "I have taken the club as far as I can," he stated.

After acting as assistant to Howard Wilkinson with the England under-21 team, Worthington moved to Norwich City on 27 June 2000 as assistant to Bryan Hamilton. He was given the role of assistant manager for the Northern Ireland national under-21 team on 22 August 2000, which he shared with his duties at Norwich. He was appointed caretaker manager at Norwich on 4 December 2000 after Hamilton resigned and on 2 January 2001 was appointed as permanent manager. He later saved the club from relegation into the Second Division. The 2001–02 season, Worthington's first full season, saw Norwich reach the 2002 First Division play-off Final, in which they lost to Birmingham City in a penalty shoot-out.

In his third full season in charge, 2003–04, Worthington took Norwich into the Premier League after winning the First Division championship with a club record 94 points. With one match remaining in 2004–05, Norwich were one point above the relegation zone, but after a 6–0 defeat by Fulham were relegated in 19th place.

Norwich were tipped to make an instant return into the Premier League in 2005–06 having retained the majority of their squad. The team failed to mount the expected promotion challenge, which led to some supporters calling for Worthington to leave the club, with Norwich finishing the season ninth in the Championship table. After a defeat to Plymouth Argyle early in September 2006, Norwich's majority shareholders, Delia Smith and Michael Wynn-Jones, released a statement expecting Worthington to improve the team's performance in the following matches. Worthington was sacked by Norwich almost immediately after a 4–1 defeat to Burnley on 1 October 2006, a result that left the team 17th in the table.

Worthington was appointed caretaker manager of relegation threatened Championship club Leicester City for the rest of 2006–07 on 11 April 2007. Despite losing his first match to former club Norwich, he was able to steer Leicester to safety and stated his desire to become Leicester's permanent manager. He lost out on the position to Martin Allen.

Worthington was appointed manager of League Two club York City on 4 March 2013, after Gary Mills was sacked two days earlier. His first match in charge was a 3–2 defeat away to AFC Wimbledon on 9 March 2013. On the last day of the season, 27 April 2013, York won 1–0 away to Dagenham & Redbridge, which secured the club's League Two status, finishing the season in 17th place. He signed a new one-year rolling contract with York on 3 May 2013. Worthington managed the team that reached the League Two play-offs in 2013–14, in which York were beaten 1–0 on aggregate in the semi-final by Fleetwood Town. He resigned as York manager on 13 October 2014 with the team one place above the relegation zone, and was quoted as saying "In recent weeks, performances have not been up to my high standards and I take full responsibility for this". 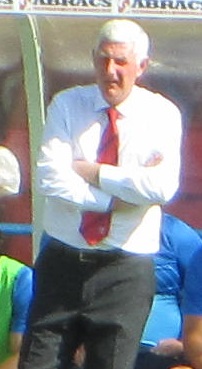 Worthington as manager of York City in 2013

All content from Kiddle encyclopedia articles (including the article images and facts) can be freely used under Attribution-ShareAlike license, unless stated otherwise. Cite this article:
Nigel Worthington Facts for Kids. Kiddle Encyclopedia.