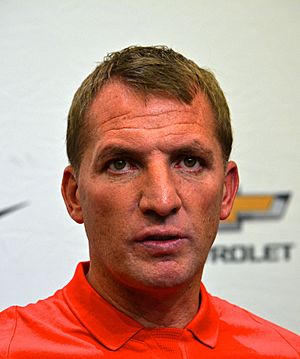 Brendan Rodgers (born 26 January 1973) is a Northern Irish football manager and former player. He is the manager of Premier League club Leicester City. He managed Liverpool from 2012 to 2015, finishing second in the Premier League in 2014. He was sacked in October 2015. In 2016, he joined Scottish Premiership club Celtic. In his two-and-a-half seasons with Celtic, he won two domestic trebles. In 2019, he left Celtic to manage Leicester City. He has also managed Watford, Reading and Swansea City. In his playing days, he played for Ballymena United and Reading before retiring at the age of 20 due to injury.

Rodgers was born in Carnlough. His son, Anton (born 1993), is a footballer.

All content from Kiddle encyclopedia articles (including the article images and facts) can be freely used under Attribution-ShareAlike license, unless stated otherwise. Cite this article:
Brendan Rodgers Facts for Kids. Kiddle Encyclopedia.