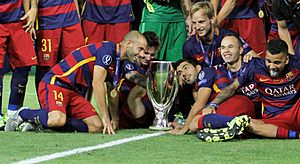 FC Barcelona are the only European men's team in football history to win a continental treble twice, in 2008–09 and in 2014–15 (pictured).

This list has clubs who have won their country's highest level league and the primary cup competition (the double), as well as the main continental tournament, all in the same season. Celtic was the first club to do this in 1967. They won the Scottish Football League, Scottish Cup, and European Cup. They also won the Scottish League Cup that year. This makes them the only team in history to win the domestic treble and the European Cup in the same season (although most European nations do not have a League Cup).

In men's football, seven European clubs have achieved the treble since 1967. FC Barcelona and Fc Bayern are the only clubs to win this treble twice. Cruz Azul is the only Mexican team to win a continental treble. It has done this twice, in 1969 and 1997.

No South American team has achieved the treble. This is because many countries there do not (or did not) have a major knockout cup. The Copa do Brasil only began in 1989, and the Copa Argentina began in 2011. Uruguay still does not have a knockout cup.

All content from Kiddle encyclopedia articles (including the article images and facts) can be freely used under Attribution-ShareAlike license, unless stated otherwise. Cite this article:
Treble (association football) Facts for Kids. Kiddle Encyclopedia.