Kashima Antlers are a Japanese professional association football club playing in the J1 League with financial backing from the Nippon Steel & Sumitomo Metal.

Since the J. League's creation and introduction of professional Japanese football in 1993, Kashima have proved by far Japan's most successful club team, having won the J. League title a record eight times, the J. League Cup a record six times and the Emperor's Cup five times for an unprecedented total of nineteen major domestic titles. Kashima also won their first AFC Champions League title in 2018. 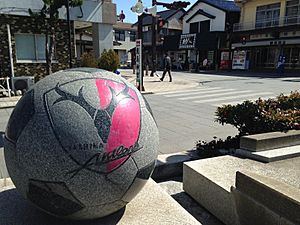 Kashima have finished in the top five of the league for over seventy percent of all seasons played to date, recorded an average end of season league placing of third and captured a major domestic title in over sixty percent of all seasons played to date. Kashima won the most titles out of all the J. League Champions, and are also one of only two teams to have competed in Japan's top flight of professional football every year since its inception.

In 2016, they became the first Asian team to reach the FIFA Club World Cup final following a 3–0 victory over South American champions Atlético Nacional. In the final, after a 2–2 draw against European champions Real Madrid after 90 minutes, they were beaten 4–2 after extra time. 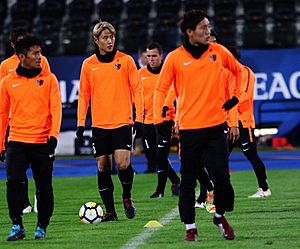 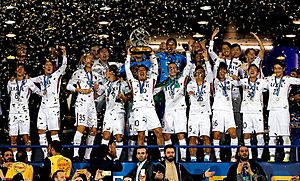 The name ‘Antlers’ is derived from the city of Kashima, which literally translates to ‘Deer Island’. The club crest not only resembles deer antlers but it also reflects the image of rose thorn as it is the official flower of Ibaraki, the home prefecture of the club.

Deer are amiable animals and are viewed in some religions as spiritual messengers. In fact, Kashima Shrine, one of the most famous shrines in Japan and located in close proximity to the club headquarters, have kept and raised deer for more than 1,300 years as spiritual symbol. Deer are affectionate animals but are also known for their courageous character as they battle each other head to head with lethal antlers.

Founded in 1947 as Sumitomo Metal Industries Factory Football Club in Osaka. It played in the semi-professional Japan Soccer League and moved to Kashima, Ibaraki Prefecture in 1975. 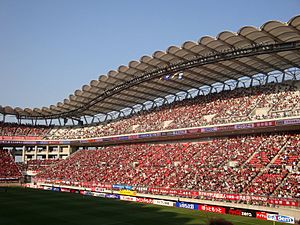 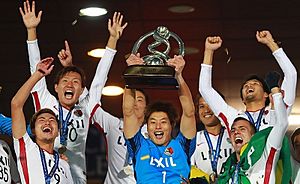 All content from Kiddle encyclopedia articles (including the article images and facts) can be freely used under Attribution-ShareAlike license, unless stated otherwise. Cite this article:
Kashima Antlers Facts for Kids. Kiddle Encyclopedia.