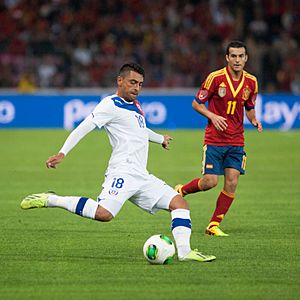 In association football, kit (also referred to as a strip or uniform) is the standard equipment and attire worn by players. The sport's Laws of the Game specify the minimum kit which a player must use, and also prohibit the use of anything that is dangerous to either the player or another participant. Individual competitions may have further restrictions, such as regulating the size of logos displayed on shirts and stating that, in the event of a match between teams with identical or similar colours, the away team must change to different coloured attire.

Footballers generally wear identifying numbers on the backs of their shirts. Originally a team of players wore numbers from 1 to 11, corresponding roughly to their playing positions, but at the professional level this has generally been superseded by squad numbering, whereby each player in a squad is allocated a fixed number for the duration of a season. Professional clubs also usually display players' surnames or nicknames on their shirts, above or below their squad numbers.

Football kit has evolved significantly since the early days of the sport when players typically wore thick cotton shirts, knickerbockers and heavy rigid leather boots. In the twentieth century, boots became lighter and softer, shorts were worn at a shorter length, and advances in clothing manufacture and printing allowed shirts to be made in lighter synthetic fibres with increasingly colourful and complex designs. With the rise of advertising in the 20th century, sponsors' logos began to appear on shirts, and replica strips were made available for fans to purchase, generating significant amounts of revenue for clubs.

All content from Kiddle encyclopedia articles (including the article images and facts) can be freely used under Attribution-ShareAlike license, unless stated otherwise. Cite this article:
Kit (association football) Facts for Kids. Kiddle Encyclopedia.