Bohemian F.C. is a football club in Dublin, Ireland. They play in the League of Ireland. The club is owned by the club members.

The club was founded in 1890. They were member of the Irish Football League from 1902 to 1911 and 1912 to 1920. During this time the greatest success was the Irish Cup in 1908 and were five times runner-up. It was a founding member of the League of Ireland in 1921. The club is one of only two clubs to have been members of the League of Ireland since it was founded (the other being Shelbourne). Bohemians is the only club who always played in the top division. Till 1969 they were an amateur team. Today they are a professional club. 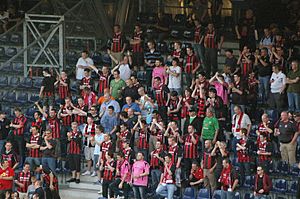 Supporters during a away match 2009 in Salzburg

Bohemians play their home matches at Dalymount Park in the Northside neighbourhood of Phibsborough. Their club colours are red and black. Bohemians supporters often refer to their club by a number of nicknames including 'Bohs', 'The Gypsies' and 'The Big Club'. The big rival is Shamrock Rovers a club from Dublins south side.

All content from Kiddle encyclopedia articles (including the article images and facts) can be freely used under Attribution-ShareAlike license, unless stated otherwise. Cite this article:
Bohemian F.C. Facts for Kids. Kiddle Encyclopedia.