Phibsborough ( Irish: Baile Phib), also spelled Phibsboro, is a mixed commercial and residential neighbourhood on the Northside of Dublin, Ireland.

The Bradogue River crosses the area in a culvert, and the Royal Canal passes through its northern reaches, notably at Cross Guns Bridge. Formerly, a branch of the canal ran to the Broadstone basin, later the site of the Midland Great Western Railway Terminus and currently the headquarters of Bus Éireann. Mountjoy Prison is located in the district.

Phibsborough, Grangegorman and Broadstone both have stops on the Luas Green Line located along the former Midland & Great Western Railway line. The Phibsborough stop is located at the railway cutting between the North Circular Road and the Cabra Road. It has lateral platforms. Access to the platform level is from both the North Circular and Cabra Roads via stairs and lifts from the new deck levels abutting the existing road overbridges. The Broadstone stop is located at Prebend Street and the Western Way. The Phibsboro stop serves the residential communities and facilitates interchange with bus services on the North Circular and Cabra Roads. The Broadstone stop serves the Mountjoy area and the newly built Technological University Dublin campus located at Grangegorman.

The Royal Canal passes along the northern boundary, separating Phibsborough from Glasnevin. Below the fifth lock, east of Crossguns Bridge, the Broadstone Harbour city markets bound main branch of the canal ran south, to the now paved over Harbour. The filled in former mainline is now covered by a verdant linear park. The adjacent road is called the Royal Canal Bank. It consists of a variety of multi-period homes some dating from the 1750s. The canal's current mainline runs south-east to Spencer Dock at the North Wall. The parkway passes Mountjoy Gaol, under Blacqueire Bridge, along the high banked eastern side of the Phibsborough Road. Originally the mainline, Foster Aqueduct carried the canal over the Phibsborough Road to the harbor terminus which sat directly opposite the Kings Inns at Constitution Hill.

Phibsboro is renowned for its mahogany and marble Victorian Dublin pubs. Dublin Victorian pubs are as luxuriously different from the ubiquitous 'Irish Pub ' as Vienna coffee houses are from Starbucks. Mc Gowans is at the Broadstone. At Doyles Corner there is the eponymous Doyles, the congenial Hut and now trading as Goughs, on the north west corner, the hospitable Geoghegan's Bar and Lounge.

A major teaching hospital, the Mater Misericordiae University Hospital, along with the Mater Private Hospital is both a local and national care centre. Temple St. Children's hospital is nearby. 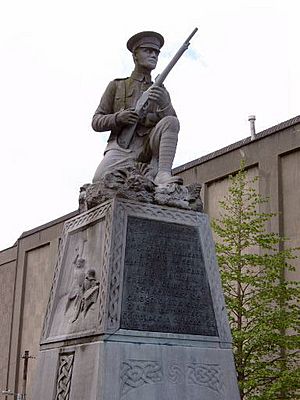 Memorial to the Irish Volunteers, 'C' Coy., by Leo Broe, at junction of North Circular Road and Royal Canal Bank, a former spur of the Royal Canal.

The original Irish language name, Glas Mochonóg, means Monck's Green, which evolved to the variants Manogue and Minogue, and anglicised as Monck. This family held the local demesne at Grangegorman following inter-marriage with the Stanley family, becoming Stanley Monck. The Green served as play field and parade ground was bisected by the main north road which ran from the foot of the Old Bridge of Dublin. Lying low between the stepping stone crossing of the Bradogue river (which now flows underground) ia a common called the Glasminogue. Between the Broadstone and the village of Baile Phib at Monck Place, it often flooded and turned into a quagmire. This area was part of the Grangegorman estate.

The Broadstone area underwent significant urban development in the early nineteenth century in order to fulfill the commercial and residential needs of the Royal Canal Company headquarters and Harbour Terminus operation. The later onset of John S. Mulvaney's Midland Great Western Railway and the railway engineering works brought further development to North Circular Road intersection and east to Blessington Street. The natural expansion of the city saw the development move north with residential housing reaching Phibsborough, and Glasnevin, and the Phoenix Park to the northwest.

St. Peter's Catholic Church and schools date from 1862. The construction of the church was controversial, resulting in a long and costly lawsuit. This dispute between the architect and builder ended in the courts and required the intervention of the Roman Catholic Archbishop of Dublin. All Saints Church of Ireland Parish Church, Phibsborough Road, was completed in 1904. The renowned Tractarian, Dr Maturin, was rector for many years, establishing a High Church tradition of worship. The beautiful interior has been restored in recent years, having suffered fire damage in 1968. 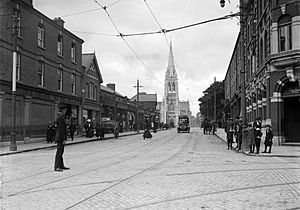 The Dublin Metropolitan Police on duty with a policeman about to check an approaching car in 1905 in Phibsborough.

At the time of the Easter Rising, the de Valera family home was at 34, Munster Street. Phibsborough has a number of memorials including one to Sean Healy, a 15-year-old member of the Fianna. Healy was one of two Phibsborough Road residents killed during the Easter Rising, the other being James Kelly (18). Local participants in the War of Independence include Harry Boland who was born in Phibsborough and grew up there. His friend Dick McKee was born at Phibsborough Road. One of The Forgotten Ten, Bernard Ryan, lived here until his execution in Mountjoy Jail. The sculpture by Leo Broe at Royal Canal Bank was commissioned in memory of the local contingent of Irish Volunteers.

The Broadstone Station was closed in 1937. These buildings constituted the Dublin Terminus, headquarters, and railworks of the Midland Great Western Railway and the Royal Canal Company. They now serve as the administrative centre and district bus garage for Bus Éireann and Dublin Bus. The impressive nineteenth-century main building, fronted by a classical Egyptian-style facade, and a Corinthian columnar service access is currently an eyesore. It awaits redevelopment as part of a planned regeneration of the area.

During his early years, author James Joyce and his family lived at No. 7, St. Peter's Road.

Glasmanogue was the name of a former common along the Phibsborough Road, north of the culverted Bradogue River.

Since the post war expansion of Dublin, this area along with Glasnevin and Drumcondra provided amenities to the north city business district in the way that Ranelagh, Rathmines and Harold's Cross did to the south city. The convenient location, combined with easy access and good public transport facilities, led to the conversion of larger homes into bedsitter flats. The pace of economic advancement during the Celtic Tiger decade saw an increased demand for new flats and townhouse projects. This housing wave provided an opportunity for the re-conversion of the historic properties back to family homes. Much the same has occurred on the city south side. In addition, many existing semi-derelict properties and architectural curiosities were converted into modern apartments within their historic shells. Many Victorian and Edwardian facades were restored. Developers have secured planning permission here to upgrade the existing Phibsboro Shopping Centre. The restored terraces of pink, biscuit and red-brick houses complement the converted historic churches, banks and offices. There are a number of Victorian era pubs in the area. The government announced plans to close the inadequate facilities at Mountjoy Gaol and transfer the operations to Thornhill, a new prison in Fingal County.

The first Phibsborough community arts festival, Phizzfest, took place from 9 to 12 September 2010. Among the writers that took part were Anne Enright and Dermot Bolger.

All content from Kiddle encyclopedia articles (including the article images and facts) can be freely used under Attribution-ShareAlike license, unless stated otherwise. Cite this article:
Phibsborough Facts for Kids. Kiddle Encyclopedia.