The Benchers of King's Inns award the degree of barrister-at-law necessary to qualify as a barrister be called to the bar in the Republic of Ireland. As well as training future and qualified barristers, the school extends its reach to a diverse community of people from legal and non-legal backgrounds offering a range of accessible part-time courses in specialist areas of the law. King's Inns is also a centre of excellence in promoting the use of the Irish language in the law.

The society was created in 1541, 51 years before Trinity College, Dublin was founded, making it one of Ireland's oldest professional and educational institutions. The founders named their society in honour of King Henry VIII of England and his newly established Kingdom of Ireland. The society secured a lease of lands at Inns Quay on the north bank of the River Liffey in Dublin. The society was reconstituted in 1607, having been inactive for some time. In 1790 the Inns Quays site was acquired for the purposes of the Four Courts; the foundation stone at the present building at the top of Henrietta Street was laid on 1 August 1800, with James Gandon being commissioned as the architect. The building was completed by his pupil Henry Aaron Baker.

From almost the moment that King's Inns was founded, London required Irishmen who wished to practise as barristers to attend the inns of court in London, and that requirement stayed in place until the late nineteenth century. Only from the middle of the eighteenth century onwards were courses of legal education provided at King's Inns. Candidates who have an approved law degree may apply for the Degree of Barrister-at-Law (Latin: ad Gradum Advocatum Apud Judices). Alternatively, candidates without an approved law degree may undertake the society's Diploma in Legal Studies before presenting for the society's degree. Those who are presented with the degree are entitled to be called to and practise at the "Bar of Ireland". In 2006, the society had an enrolment of approximately 300 students, whilst there are approximately 2,000 practising barristers. 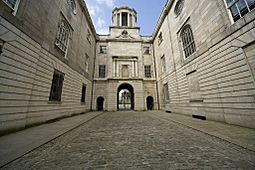 Courtyard of the society's building on Henrietta Street

The society has generally kept a low profile in current affairs in Ireland, though it did come to prominence in 1972, when financial difficulties led to the society selling a considerable stock of non-legal books it had in its library. The library collection dates from the end of the 18th century, (when the society also adopted its motto 'Nolumus mutari'), and was based on part of that of Christopher Robinson, senior puisne judge of the Court of King's Bench, who died in 1787. Books were sold at auction at Sotheby's, London, and a considerable stock of them were sold to clients outside Ireland. This was seen at the time as a major cultural outflow, as many of the books were of historical and cultural significance. In addition, the society's library had received an annual grant since 1945 for the upkeep of the books from the Irish Exchequer. A King's Inns team or individual has often won the prestigious Irish Times National Debating Championship, and in 2010 won the European Universities Debating Championships. In 2006 the Inns' hurling team competed in and won the Fergal Maher Cup (3rd Level Division 3) in their inaugural year and have subsequently reached the final and semi-final.

After crossing Bolton Street, Henrietta Street runs into King's Inns Street. The latter was renamed due to its proximity to the King's Inns. In 1756, this street appears as "Turn Again Lane" on Rocque's map of Dublin. Henrietta Street is thought to have been named by Luke Gardiner in honour of Henrietta Somerset (1690–1726), who was married to the second duke of Grafton, lord lieutenant of Ireland, 1724-7. Her portrait by Enoch Seeman survives.

All content from Kiddle encyclopedia articles (including the article images and facts) can be freely used under Attribution-ShareAlike license, unless stated otherwise. Cite this article:
King's Inns Facts for Kids. Kiddle Encyclopedia.