Inns of Court facts for kids 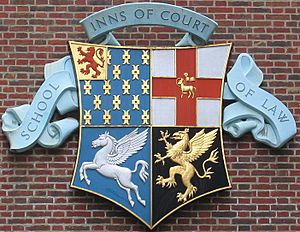 The Inns of Court are a group of four legal societies in Britain that have the exclusive right to train barristers and to regulate their admission to the British bar. The buildings, which house these societies, are called Inns of Court. The Inns of Court have directing and disciplinary functions over their members. The Inns also provide libraries, dining facilities and professional accommodations to members. Each Inn also has a church or chapel.

Over the centuries the number of active Inns of Court was reduced to four, which are Lincoln's Inn, Gray's Inn, Inner Temple and Middle Temple.

All content from Kiddle encyclopedia articles (including the article images and facts) can be freely used under Attribution-ShareAlike license, unless stated otherwise. Cite this article:
Inns of Court Facts for Kids. Kiddle Encyclopedia.