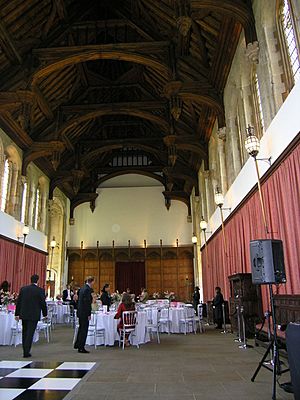 A great hall was the main room of a royal palace, a nobleman's castle or a large manor house in the Middle Ages. At that time the word great meant big. Great halls were found in France, England and Scotland and some other European countries.

A great hall was a rectangular room between 1.5 and 3 times as long as it was wide, and also higher than it was wide. At night some members of the household might sleep on the floor of the great hall.

Two very large surviving royal halls are Westminster Hall and the Wenceslas Hall in Prague Castle. Penshurst Place in Kent, England has a hall from the 14th century. There are lots of 16th century and early 17th century halls in England, Wales and Scotland, for example those at Longleat (England), Burghley House (England), Bodysgallen Hall (Wales), Muchalls Castle (Scotland) and Crathes Castle (Scotland); however, by the late 1700s the great hall was beginning to lose its purpose over time.

All content from Kiddle encyclopedia articles (including the article images and facts) can be freely used under Attribution-ShareAlike license, unless stated otherwise. Cite this article:
Great hall Facts for Kids. Kiddle Encyclopedia.