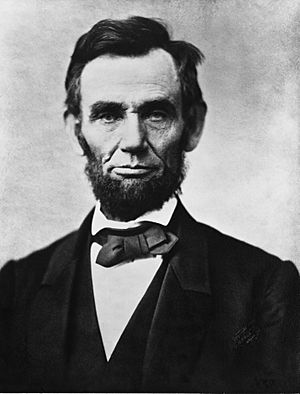 Abraham Lincoln was a lawyer first, and became a politician later

A lawyer (also called an "advocate", "attorney", "barrister", "counsel", "counsellor", or "solicitor") is someone who practices law. A lawyer has earned a degree in law, and has a license to practice law in a particular area.

If people have any problem regarding the law, they can contact a lawyer for advice. A legal problem is referred to as a case. A person can hire a lawyer to start a case against someone else, or to help with a case that has been started against them. If the case goes to court, the lawyer will represent their client in court. The lawyer will use their knowledge of the law to convince the court that the client is on the right side of the argument. Lawyers also help people "settle out of court," which means that both sides of the argument agree to a punishment ahead of time so that they will not have to go to trial.

When a person is accused of a crime, the person has a defense lawyer to try to show they have not committed a crime. The lawyer arguing that they did do the crime is called the prosecutor.

Lawyers also prepare legal documents their clients. Examples: buying or selling property or making a will (testament). Certain lawyers (called "commissioners of oaths" in England) can take legally binding witness statements which can be presented to the court.

Lawyers generally charge a fee for the work that they do, but sometimes advice is offered freely, which is called "pro bono," meaning "for the public good." In many countries, if a person is accused of a crime and unable to pay for a lawyer, the government will pay a lawyer to represent them using tax money.

All content from Kiddle encyclopedia articles (including the article images and facts) can be freely used under Attribution-ShareAlike license, unless stated otherwise. Cite this article:
Lawyer Facts for Kids. Kiddle Encyclopedia.