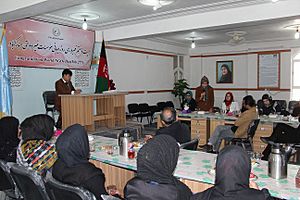 Government funding of NGOs is controversial, since, according David Rieff, writing in The New Republic, "the whole point of humanitarian intervention was precisely that NGOs and civil society had both a right and an obligation to respond with acts of aid and solidarity to people in need or being subjected to repression or want by the forces that controlled them, whatever the governments concerned might think about the matter."

All content from Kiddle encyclopedia articles (including the article images and facts) can be freely used under Attribution-ShareAlike license, unless stated otherwise. Cite this article:
Non-governmental organization Facts for Kids. Kiddle Encyclopedia.