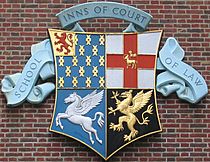 Combined coat of arms of the four Inns of Court. Gray's Inn's arms are at the bottom-right. 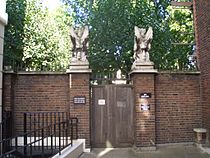 The Honourable Society of Gray's Inn is one of the four Inns of Court around the Royal Courts of Justice in London. They may call members to the Bar and allow them to practice as barristers. The other Inns are Middle Temple, Lincoln's Inn and Inner Temple.

It is situated in Holborn, in the London Borough of Camden, just on the border with the City of London and the City of Westminster.

All content from Kiddle encyclopedia articles (including the article images and facts) can be freely used under Attribution-ShareAlike license, unless stated otherwise. Cite this article:
Gray's Inn Facts for Kids. Kiddle Encyclopedia.