Dissolution of the monasteries facts for kids 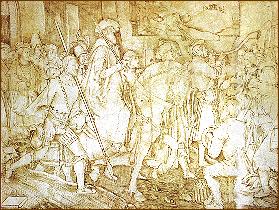 Modern drawing of one of Oliver Cromwell's visitors leaving a monastery. People think this could be Colchester Abbey, after it was ruined.

The dissolution of the monasteries was an event that happened from 1536 to 1540, when English King Henry VIII took away the land and money that the nuns and monks of the Roman Catholic church owned. Henry VIII then gave this land and money to people that supported him.

This was also when Henry VIII made himself the new head of the Church of England (which is a type of Christianity). Parliament made the Act of Supremacy to give him the right to do both these things. It was part of the Protestant Reformation in England.

All content from Kiddle encyclopedia articles (including the article images and facts) can be freely used under Attribution-ShareAlike license, unless stated otherwise. Cite this article:
Dissolution of the monasteries Facts for Kids. Kiddle Encyclopedia.