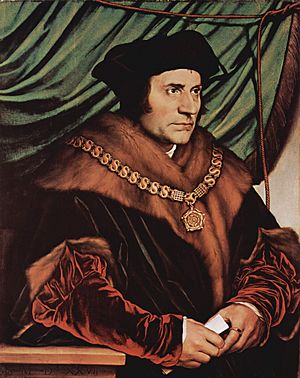 Sir Thomas More or Saint Thomas More (7 February 1478 – 6 July 1535), was an English writer, lawyer, and statesman. He held many important jobs including Speaker of the House of Commons, Lord Chancellor and advisor to the King Henry VIII. He also invented the word "utopia", which means: "an ideal place to live". This is described in the book he wrote called Utopia.

When King Henry left the Roman Catholic Church because the Pope would not give him a divorce from his first wife, he started The Church of England. More was a devout Catholic, so he did not accept the King as head of the Church. Because of this, he was arrested and executed for treason. He was thought of as a martyr and made a saint by the Roman Catholic Church in 1935. His feast day is on 22 June and he is the patron of lawyers and politicians. A play and movie called A Man For All Seasons is based on his life.

All content from Kiddle encyclopedia articles (including the article images and facts) can be freely used under Attribution-ShareAlike license, unless stated otherwise. Cite this article:
Thomas More Facts for Kids. Kiddle Encyclopedia.