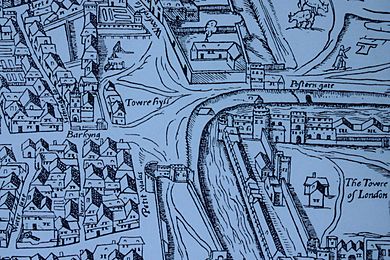 Tower Hill is an elevated spot northwest of the Tower of London, in the London Borough of Tower Hamlets in the East End of London, just outside the City of London boundary.

It was formerly an extra-parochial area known as Great Tower Hill. Historically it was the site of countless public executions and today it is notable for being the site of the Tower Hill Memorial.

The area is served by Tower Gateway DLR station and Tower Hill tube station. A road named Tower Hill forms a short stretch of the A3211 route between Byward Street in the west and a junction with Minories and Tower Hill Terrace in the east. 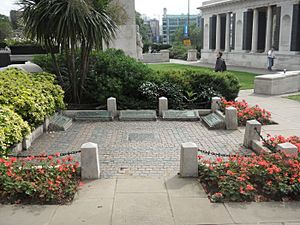 Site of the Scaffold on Tower Hill

One of the oldest parts of London, archaeological evidence shows that there was a settlement on the hill in the Bronze Age and much later a Roman village that was burnt down during the Boudica uprising. A nearby church, All Hallows-by-the-Tower, is known for fragments of Romanesque architecture dating back to AD 680; the church itself dates from 675.

Great Tower Hill was an extra-parochial area within the Tower Liberty, under the direct administrative control of the Tower of London and outside the jurisdiction of the City of London and the county of Middlesex. In 1855 the area became part of the district of the Metropolitan Board of Works. The "District of Tower" became part of the Whitechapel District, under the authority of the Whitechapel District Board of Works. This was ambiguous and The Great Tower Hill Act 1869 was required to explicitly interpret it as Old Tower Without, including within it Great Tower Hill. The Tower Liberty was abolished in 1894 and incorporated into the County of London.

Public executions of high-profile traitors and criminals were often carried out on Tower Hill, including:

All content from Kiddle encyclopedia articles (including the article images and facts) can be freely used under Attribution-ShareAlike license, unless stated otherwise. Cite this article:
Tower Hill Facts for Kids. Kiddle Encyclopedia.