Chelsea Old Church, also known as All Saints, is an Anglican church, on Old Church Street, Chelsea, London SW3, England, near Albert Bridge. It is the church for a parish in the Diocese of London, part of the Church of England.

Inside the Grade I listed building, there is seating for 400 people. There is a memorial plaque to the author Henry James (1843–1916) who lived nearby on Cheyne Walk. To the west of the church is a small public garden containing a sculpture by Sir Jacob Epstein.

Chelsea Old Church dates from 1157. Formerly it was the parish church of Chelsea when it was a village, before it was engulfed by London. The building originally consisted of a 13th-century chancel with chapels to the north and south (c.1325) and a nave and tower built in 1670.

The chapels were private property. The one to the north was called the Lawrence Chapel and was owned by Chelsea's Lord of the Manor. The chapel to the south was rebuilt in 1528 as Sir Thomas More's private chapel. The date can be found on one of the capitals of the pillars leading to the chancel, which were reputedly designed by Holbein. There is a statue by Leslie Cubitt Bevis of More outside the church, facing the river.

There is a 1669 memorial to Lady Jane Cheyne. It was designed by the son of Gian Lorenzo Bernini and executed by Gian Lorenzo's favourite sculptor Antonio Raggi.

The church appears in several paintings by James McNeill Whistler and J. M. W. Turner, in all cases little more than distant tower; the church was painted white in the 19th century. For example, the church was depicted in the background of Whistler's Nocturne: Blue and Gold - Old Battersea Bridge, painted c.1872–5. 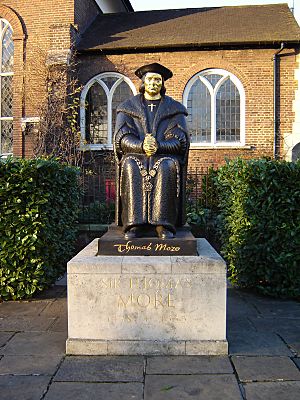 Thomas More's statue in front of the Church

The church suffered severe bombing damage during the Blitz of the Second World War in 1941, with the More Chapel least affected. Services were held in the adjoining hospital for nine years. In 1950 the More Chapel was reopened, followed by the chancel and Lawrence Chapel in May 1954, after restoration by the architect Walter Godfrey.

In May 1958, the entire church was reconsecrated by the Bishop of London, in the presence of Queen Elizabeth The Queen Mother. The Church has been restored in its entirety on its old foundations. It looks similar to the way it did before World War II. Many of the tombs inside have been reconstructed, almost like jigsaw puzzles.

In 1978, Jack Leslau wrote an article in The Ricardian suggesting that one of the Princes in the Tower survived, namely Edward V of England, and is buried in Chelsea Old Church. His evidence depends on a complicated interpretation of a painting by Hans Holbein the Younger. Leslau's website expands on this thesis, but no major academic institution endorses the thesis. The social reformer The Baroness Courtney of Penwith is buried in the church.

In the year 2000, the Museum of London Archaeological Services carried out an archaeological dig at the cemetery.

All content from Kiddle encyclopedia articles (including the article images and facts) can be freely used under Attribution-ShareAlike license, unless stated otherwise. Cite this article:
Chelsea Old Church Facts for Kids. Kiddle Encyclopedia.