Sir Jacob Epstein KBE (10 November 1880 – 19 August 1959) was an American-born British sculptor, a pioneer of modern sculpture. He was born in the United States, and moved to Europe in 1902, becoming a British citizen in 1911. He often produced controversial works which challenged taboos on what was appropriate subject matter. His portrait heads were traditional, but much of his other work was modernist. He also made paintings and drawings, and often exhibited his work. Epstein was appointed a Knight Commander of the Order of the British Empire in the 1954 New Year Honours. 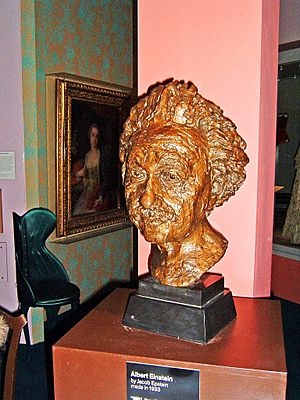 Bust of Einstein (1933) in Birmingham Museum and Art Gallery

He studied art in his native New York as a teenager, sketching the city, and joined the Art Students League of New York in 1900. For his livelihood, he worked in a bronze foundry by day, studying drawing and sculptural modelling at night. Epstein's first major commission was to illustrate Hutchins Hapgood's 1902 book Spirit of the Ghetto.

Moving to Europe in 1902, he studied in Paris. He settled in London in 1905 and married Margaret Dunlop in 1906. Epstein became a British subject on 4 January 1911. Many of Epstein's works were sculpted at his two cottages. He served briefly in the 38th Battalion of the Royal Fusiliers during World War I, he was discharged in 1918.

During the Second World War, Epstein was asked to undertake six commissions for the War Artists' Advisory Committee. One of those commissions being a bust of Winston Churchill completed in early 1947.

Epstein would often sculpt the images of friends, casual acquaintances, and even people from the street into his studio almost at random. He worked even on his dying day. He also painted; many of his watercolours were of Epping Forest, where he lived and sculpted. These were often exhibited at the Leicester Galleries in London.

Epstein met Albert Einstein at Roughton Heath, Norfolk, in 1933 and had three sittings for a bust. He remembered his meeting with Einstein as, "His glance contained a mixture of the humane, the humorous and the profound. This was a combination which delighted me. He resembled the ageing Rembrandt." 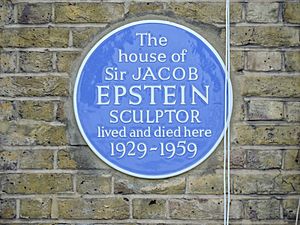 Epstein died in August 1959 in Kensington and is buried in Putney Vale Cemetery. A blue plaque may be found at "Deerhurst", 50 Baldwins Hill in Loughton, which was his home from 1933 to 1950.

The Garman Ryan Collection, including several works by Epstein, was donated to the people of Walsall, by Lady Epstein in 1973. It is on display at The New Art Gallery Walsall. His art is displayed all over the world; highly original for its time, its influence on the younger generation of sculptors was significant.

All content from Kiddle encyclopedia articles (including the article images and facts) can be freely used under Attribution-ShareAlike license, unless stated otherwise. Cite this article:
Jacob Epstein Facts for Kids. Kiddle Encyclopedia.