The museum/gallery is run by Birmingham Museums Trust, the largest independent museums trust in the United Kingdom, which also runs eight other museums around the city. Entrance to the Museum and Art Gallery is free, but some major exhibitions in the Gas Hall incur an entrance fee.

In 1829, the Birmingham Society of Artists created a private exhibition building in New Street, Birmingham while the historical precedent for public education around that time produced the Factory Act 1833, the first instance of Government funding for education.

The Museums Act 1845 "[empowered] boroughs with a population of 10,000 or more to raise a 1/2d for the establishment of museums." In 1864, the first public exhibition room, was opened when the Society and other donors presented 64 pictures as well as the Sultanganj Buddha to Birmingham Council and these were housed in the Free Library building but, due to lack of space, the pictures had to move to Aston Hall. Joseph Nettlefold bequeathed twenty-five pictures by David Cox to Birmingham Art Gallery on the condition it opened on Sundays. 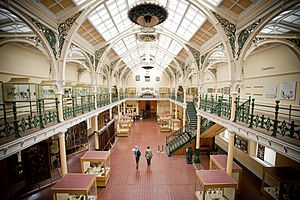 Industrial Gallery, the original part of the Art Gallery

In June 1880, local artist Allen Edward Everitt accepted the post of honorary curator of the Free Art Gallery, a municipal institution which was the forerunner of the Birmingham Museum and Art Gallery.

Jesse Collings, Mayor of Birmingham 1878–79, was responsible for free libraries in Birmingham and was the original proponent of the Birmingham Art Gallery. A £10,000 (2010: £770,000) gift by Sir Richard and George Tangye started a new drive for an art gallery and, in 1885, following other donations and £40,000 from the council, the Prince of Wales officially opened the new gallery on Saturday 28 November 1885. The Museum and Art Gallery occupied an extended part of the Council House above the new offices of the municipal Gas Department (which in effect subsidised the venture thus circumventing the Public Libraries Act 1850 which limited the use of public funds on the arts). The building was designed by Yeoville Thomason. The metalwork for the new building (and adjoining Council House) was by the Birmingham firm of Hart, Son, Peard & Co. and extended to both the interior and exterior including the distinctive cast-iron columns in the main gallery space for the display of decorative art. The lofty portico, surmounted by a pediment by Francis John Williamson, representing an allegory of Birmingham contributing to the fine arts, was together with the clock-tower considered the "most conspicuous features" of the exterior upon its opening. By 1900 the collection, especially its contemporary British holdings, was deemed by the Magazine of Art to be "one of the finest and handsomest" in Britain.

Until 1946, when property taxes were voted towards acquisitions, the museum relied on the generosity of private individuals. John Feeney provided £50,000 to provide a further gallery.

Seven galleries had to be rebuilt after being bombed in 1940. Immediately after World War II "Mighty Mary" Mary Woodall (1901–1988) was appointed keeper of art under director, Trenchard Cox. Woodall and Cox, through their links to the London art world, were able to attract exhibitions, much publicity and donations to the gallery. In 1956, Woodall replaced Cox when the latter became Director of the Victoria and Albert Museum.

In 1951, the Museum of Science and Industry, Birmingham was incorporated into BM&AG. In 2001, the Science Museum closed with some exhibits being transferred to Thinktank, Birmingham Science Museum, which was operated by the independent Thinktank Trust that has since become part of Birmingham Museums Trust.

The Round Room with Jacob Epstein's The Archangel Lucifer

The main entrance is located in Chamberlain Square below the clock-tower known locally as "Big Brum". The entrance hall memorial reads 'By the gains of Industry we promote Art'. The Extension Block has entrances via the Gas Hall in Edmund Street and Great Charles Street. Waterhall, the original gas department, has its own entrance on Edmund Street.

In October 2010, the Waterhall closed as a BM&AG gallery as a result of a £1.5m cut to Birmingham Museums and Art Gallery's budget in 2010–11. The last BM&AG exhibition that took place in the Waterhall at that time was the Steve McCurry Retrospective that ran from 26 to 17 June October 2010. The Waterhall and the Gas Hall have reopened for exhibitions throughout the year.

The Art Gallery is most noted for its extensive collections of paintings ranging from the 14th to the 21st century. They include works by the Pre-Raphaelite Brotherhood and the world's largest collection of works by Edward Burne-Jones. Notable painters in oil include the following:

Paintings from the Dutch School include a painting each from Jan van Goyen and Willem van de Velde the Younger.

The collection of antiquities includes coins from ancient times through to the Middle Ages, artefacts from Ancient India and Central Asia, Ancient Cyprus and Ancient Egypt. The museum also holds 28 pieces of Nimrud ivories from the British School of Archaeology in Iraq. There is material from Classical Greece, the Roman Empire and Latin America. There is also mediaeval material, much of which is now on display in The Birmingham History Galleries, a permanent exhibition on the third floor of the museum.

In November 2014 a dedicated gallery was opened to display the Staffordshire Hoard. Discovered in the nearby village of Hammerwich in 2009 it is the largest hoard of Anglo-Saxon gold ever found.

In respect of local and industrial history, the tower of the Birmingham HP Sauce factory was a famous landmark alongside the Aston Expressway which was demolished in the summer of 2007. The giant logo from the top of the tower is now in the collection of the Museum.

All content from Kiddle encyclopedia articles (including the article images and facts) can be freely used under Attribution-ShareAlike license, unless stated otherwise. Cite this article:
Birmingham Museum and Art Gallery Facts for Kids. Kiddle Encyclopedia.