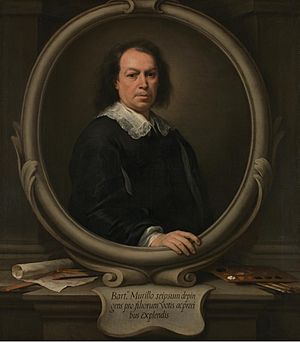 Bartolomé Esteban Murillo (Seville, baptized on January 1, 1618– April 3, 1682) was a Spanish Baroque painter. Developed in final naturalism, he advanced towards original forms of the full baroque with a perception that sometimes precedes the rococo in some of his most peculiar and imitated pictorial creations, such as the Immaculate Conception or the Good Shepherd in child figure. A central personality of the Sevillian school, with a high number of disciples and followers who carried his influence well into the 18th century, he was also the best known and most appreciated Spanish painter outside of Spain, the only one of which Sandrart included a brief and fabled biography in his Academia picturae eruditae of 1683 with the Self-portrait of the painter engraved by Richard Collin. Conditioned by the clientele, the bulk of his production is made up of works of a religious nature destined for Sevillian churches and convents, but unlike other great Spanish masters of his time, he also cultivated genre painting on a continuous and independent basis. throughout much of his career.

All content from Kiddle encyclopedia articles (including the article images and facts) can be freely used under Attribution-ShareAlike license, unless stated otherwise. Cite this article:
Bartolomé Esteban Murillo Facts for Kids. Kiddle Encyclopedia.