The Staffordshire Hoard is the largest hoard of Anglo-Saxon gold and silver metalwork yet found[update]. It consists of over 3,500 items, amounting to a total of 5.1 kg (11 lb) of gold, 1.4 kg (3 lb) of silver and some 3,500 pieces of garnet cloisonné jewellery.

The hoard was most likely deposited in the 7th century, and contains artefacts probably manufactured during the 6th and 7th centuries. It was discovered in 2009 in a field near the village of Hammerwich, near Lichfield, in Staffordshire, England. The location was in the Anglo-Saxon kingdom of Mercia at the time of the hoard's deposition.

The hoard is of "radical" importance in Anglo-Saxon archaeology. The artefacts are nearly all martial in character and contain no objects specific to female uses. The average quality of the workmanship is extremely high and especially remarkable in view of the large number of individual objects, such as swords and a helmet, from which many of the fragments in the hoard came.

The hoard was purchased jointly by the Birmingham Museum and Art Gallery and the Potteries Museum & Art Gallery for £3.285 million under the Treasure Act 1996.

Apart from three religious objects the items in the hoard are military, and there are no domestic objects, such as vessels or eating utensils, or feminine jewellery, which are the more common Anglo-Saxon gold finds. Reportedly, the contents "show every sign of being carefully selected". There is broad agreement that the typical object in the hoard was made in the 7th century, with the date of the deposition of the hoard of course post-dating the manufacture of the latest object it includes.

Along with other discoveries, examination of the hoard showed Saxon goldsmiths were able to alter the surface of the gold by depletion gilding to give the appearance of a higher gold content, a technique not previously credited to them. As with other Anglo-Saxon jewellery, the garnets in 28 pieces may have come from as far away as Sri Lanka or Afghanistan, probably in the Roman period.

A summary of the preliminary contents of the hoard, as of late 2009, is shown in the table below. This excludes items such as the gold horse's head that were in one of the 33 soil blocks that had not been examined at the time of publication of these figures. 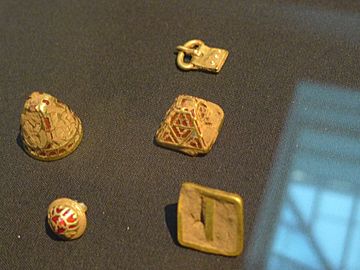 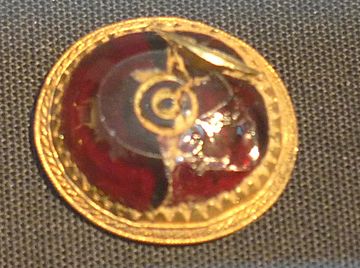 The contents include many finely worked silver and gold sword decorations removed from weaponry, including 66 gold sword hilt collars and many gold hilt plates, some with inlays of cloisonné garnet in zoomorphic designs (see lead picture). The 86 sword pommels found constitute the largest ever discovery of pommels in a single context, with many different types (some previously unknown) supporting the idea that the pommels were manufactured over a wide range of time.

The Staffordshire Hoard official press statement notes that the only items in the hoard that are obviously non-martial are two (or possibly three) crosses. Sharp (2016) has shown there are possibly many pieces with a Christian connection and the hoard is a mixture of many Christian and non-martial items. The largest of the three crosses is missing some decorative settings (yet some are present but detached) but otherwise remains intact. It may have been an altar or processional cross. It could also have been attached to the front of a book, such as a Gospel Book. Yet the cross is folded. As to the reason or reasons for this, three explanations have been put forward. One is that the folding was done prior to burial "to make it fit into a small space". A second explanation suggests that this is a sign that the burial deposit was made by pagans, who had no particular esteem for the Christian character of the objects. A third view runs in an opposite direction, namely, that this was done with reverence by Christians in order to remove the sacred character of this cross, and other Christian pieces, prior to burying them. A gold and garnet fitting, made for the corner of a flat rectangular object, may be for the corner of a book-cover, which in this context would almost certainly have been a Gospel Book. 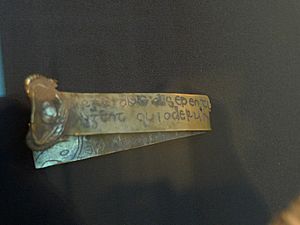 The Nova Vulgata reading of this passage is: Surge Domine et dissipentur inimici tui et fugiant qui oderunt te a facie tua (KJV: "Rise up, LORD, and let thine enemies be scattered; and let them that hate thee flee before thee.") The reading of the additional words on the second version of the text, [a]diuie nos[.r.], is unclear; they may be practice letters, meaning that the inside face was not supposed to be visible and contains an abandoned attempt at the inscription.

The passage is quoted fairly often, notably in the Life of the Mercian Saint Guthlac (d. 714), most likely composed in the 730s. The passage occurs in the context of Guthlac's meeting with Æthelbald, the later king of Mercia, in which the saint foretells that the king's enemy would "flee from your face". The parallel verse from Psalm 67 (Hebrew numbering 68), verse 2, occurs when Guthlac is driving away demons who appeared to him in a vision. Sharp (2016) has suggested the inscription shows angst in the face of a great threat and this could only have been the Viking invasion. The incised strip appears to be the stem of a cross and this indicates a Viking threat to a church. Paleographically, the inscription most likely dates to the 8th century, with the late 7th or early 9th not to be ruled out. The closest parallel to the script used is the inscription in the lead plate from Flixborough, dated to the 8th or 9th century.

The gold strip may have been originally fastened to a shield or a sword belt, or alternatively, it may have been part of the arm of a cross; a round cabochon jewel would have been fitted to the terminal end, and the other end would have fitted into the central fitting of the cross. 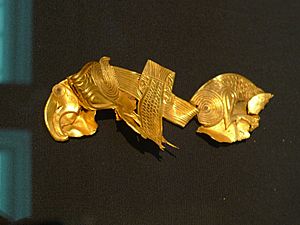 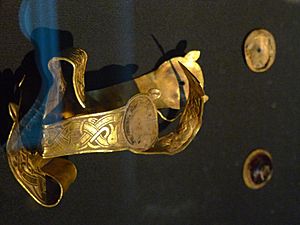 Folded panel from a cross, with interlace

The hoard was deposited in a remote area, just south of the Roman Watling Street, some 4 kilometres (2 mi) west of Letocetum, at the time part of the extra-parochial area of Ogley Hay (now part of the Hammerwich parish), in the highland separating the Pencersæte and Tomsæte within the kingdom of Mercia.

The quality of the artefacts buried in the hoard is very high. The apparent selection of "martial" artefacts, especially the decoration of swords, does not suggest that the hoard consists simply of loot. Most of the gold and silver items appear to have been intentionally removed from the objects they were previously attached to. Brooks (2010) associates the predominantly warlike character of the artefacts in the hoard with the custom of giving war-gear (heriot) as death duty to the king upon the death of one of his noblemen. The removal of the sword pommel caps finds a parallel in Beowulf which mentions warriors stripping the pommels of their enemies' swords.

Wall (2015) postulates a connection to Peada, briefly king of Mercia in 655/6. Sharp (2016) connects the deposition of the Hoard with the Viking attack on Lichfield in 875 and postulates its loss at the same time as the removal of the St Chad's Gospel from Lichfield into the Welsh area of Mercia. 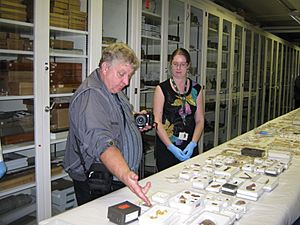 Terry Herbert examining items from the Staffordshire Hoard at the British Museum in October 2009. The items have been laid out for valuation by the Treasure Valuation Committee.

Gold artefacts were discovered by Terry Herbert on 5 July 2009, when he was searching an area of recently ploughed farmland near Hammerwich, Staffordshire, with a metal detector. Over the next five days, 244 gold objects were recovered from the soil. At this point Herbert contacted Duncan Slarke, the Finds Liaison Officer for the Staffordshire and West Midlands Portable Antiquities Scheme. The landowner, Fred Johnson, granted permission for an excavation to search for the rest of the hoard.

Excavation work was funded by English Heritage who contracted Birmingham Archaeology to do the fieldwork. Ploughing had scattered the artefacts, so an area 9 by 13 metres (30 by 43 ft) was excavated in the search. Because of the importance of the find, the exact site of the hoard was initially kept secret. A geophysical survey of the field in which the hoard was found discovered what could be a ditch close to the find. Although excavations revealed no dating evidence for the feature, further investigation is planned. In total over 3,500 pieces were recovered. A final geophysical survey using specialist equipment provided by the Home Office did not suggest any further artefacts remained to be found. 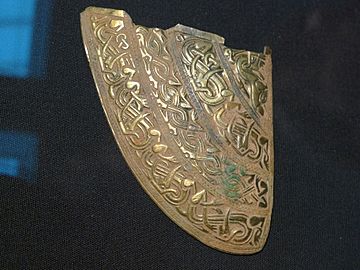 Cheek piece from a helmet

The discovery was publicly announced on 24 September 2009, attracting worldwide attention. An official website set up to showcase finds from the Hoard received over 10 million views in the first week after the announcement. Whilst Birmingham Archaeology continued to process the find, items from the Hoard were displayed at the Birmingham Museum & Art Gallery until 13 October 2009, attracting 40,000 people. Andrew Haigh, the coroner for South Staffordshire, declared the hoard to be treasure, and therefore property of the Crown. A further selection of pieces from the Hoard was displayed at the Potteries Museum & Art Gallery, Stoke-on-Trent. Key items and numerous smaller pieces were then taken to the British Museum, London, where cataloguing, and some initial cleaning and conservation work commenced.

In late March 2010, a team of archaeologists carried out a follow-up excavation on the site, digging 100 metres (110 yd) of trenches and pits in the field. According to Staffordshire county archaeologist Stephen Dean, there is no more gold or treasure to recover from the site, and the aim of the new excavation is to look for dating and environmental evidence. Archaeologists hope to be able to use this evidence to determine what the landscape looked like at the time that the hoard was deposited. 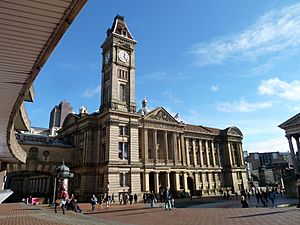 In December 2012, it was announced that 91 additional items of gold and silver metalwork had been found in the field where the Staffordshire Hoard was discovered in 2009. The finds were made in November 2012 when archaeologists and metal detectorists from Archaeology Warwickshire, working for Staffordshire County Council and English Heritage, visited the field after it had been ploughed. Many of the pieces are less than 1 gram (0.032 ozt) in weight, but there are some larger pieces, including a cross-shaped mount, an eagle-shaped mount, and a helmet cheek piece that matches one from the 2009 discovery. These additional pieces are believed to be part of the original hoard.

In January 2013, 81 of the 91 items were declared treasure at a coroner's inquest, and, after they have been valued by the Treasure Valuation Committee, Staffordshire County Council will have an opportunity to purchase the items so that they can be reunited with the rest of the hoard. Although these items were found by archaeologists, the money raised by their sale will be shared between Herbert and Johnson as they were responsible for the original discovery of the hoard. The ten items not declared treasure were identified as modern waste material.

Kevin Leahy of the British Museum has stated that the ten items not declared as belonging to the original hoard may represent part of a different Anglo-Saxon period hoard. Two of these ten items are high-quality pieces of copper alloy, but they are different in style to the gold and silver items of the original hoard. He concludes that "Anglo Saxons clearly visited the site more than once to bury items".

All content from Kiddle encyclopedia articles (including the article images and facts) can be freely used under Attribution-ShareAlike license, unless stated otherwise. Cite this article:
Staffordshire Hoard Facts for Kids. Kiddle Encyclopedia.