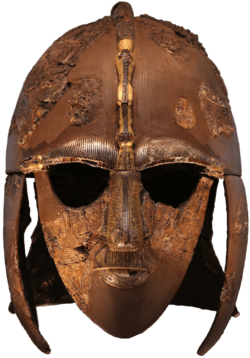 The restored ceremonial helmet is one of the most iconic finds from Sutton Hoo. 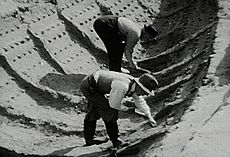 A ghostly impression of the buried ship was revealed during excavations in 1939. Much later a plaster cast was taken, from which a fibre-glass shape was produced.

Sutton Hoo is the site of two Anglo-Saxon cemeteries dating to the 6th and early 7th centuries CE that is located near Woodbridge, Suffolk, England. One contained an undisturbed ship burial including a wealth of Anglo-Saxon artefacts of outstanding art-historical and archaeological significance, which are now held in the British Museum in London. Other sites had produced significant finds, but had previously been looted.

The ship-burial, probably dating from the early 7th century and excavated in 1939, is one of the most magnificent archaeological finds in England for its size and completeness, its meaning, the quality and beauty of its contents, and for the profound interest of the burial ritual itself. 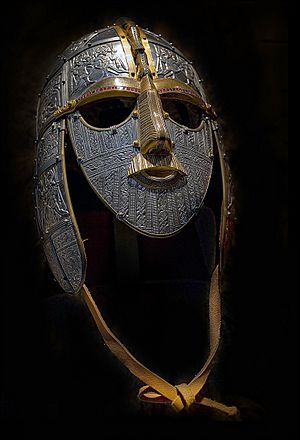 All content from Kiddle encyclopedia articles (including the article images and facts) can be freely used under Attribution-ShareAlike license, unless stated otherwise. Cite this article:
Sutton Hoo Facts for Kids. Kiddle Encyclopedia.