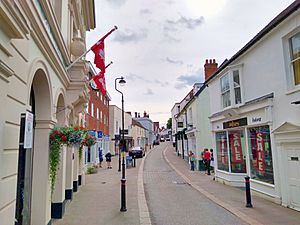 Woodbridge is a port and market town in the East Suffolk district of Suffolk, England. It is 8 miles (13 km) up the River Deben from the sea. It lies 7 miles (11 km) north-east of Ipswich and forms part of the wider Ipswich built-up area. The town is close to some major archaeological sites of the Anglo-Saxon period, including the Sutton Hoo burial ship, and had 35 households at the time of the Domesday Book of 1086. It is well known for its boating harbour and tide mill, on the edge of the Suffolk Coast and Heath Area of Outstanding Natural Beauty. Several festivals are held. As a "gem in Suffolk's crown", it has been named the best place to live in the East of England.

Archaeological finds in the area show habitation from the Neolithic Age (2500-1700 B.C.).

The area was under Roman occupation for 300 years following Queen Boadicca's failed rebellion in 59 A.D. but there is little evidence of the Romans' presence. When the Roman soldiers were recalled to Rome in 410 A.D., there was a substantial Anglo-Saxon (Germanic) settlement. It was the Angles who gave East Anglia its name.

In the early 7th century King Rædwald of East Anglia was Bretwalda, the most powerful king in England. He died in around 624, and he is probably the king buried at Sutton Hoo, just across the river Deben from Woodbridge. The burial ship is 89 feet long, and when its treasures were discovered in 1939 they were the richest ever found in British soil. They are kept in the British Museum in London. Replicas of some items, and the story of the finds, are to be found in the Woodbridge Museum, and the National Trust has built a Visitor Centre on the site.

The earliest record of Woodbridge dates from the mid-10th century, when it was acquired by St Aethelwold, bishop of Winchester, who made it a part of the endowment of the monastery he helped to refound at Ely, Cambridgeshire in AD 970. The Domesday Book of 1086 describes Woodbridge as part of the Loes Hundred. Much of Woodbridge was granted to the powerful Bigod family, who built the famous castle at Framlingham.

The town has been a centre for boat-building, rope-making and sail-making since the Middle Ages. Edward III and Sir Francis Drake had fighting ships built in Woodbridge. The town suffered in the plague of 1349, but recovered enough, and with encouragement from the Canons, and growing general prosperity, to have a new church (now St. Mary's, behind the buildings on the south side of Market Hill) constructed with limestone from the Wash and decorated with Thetford flint. By the mid 15th century the Brews family had added a tower and porch.

As religious unrest continued in the reign of the Roman Catholic Mary Tudor, Alexander Gooch, a weaver of Woodbridge, and Alice Driver of Grundisburgh were burnt for heresy on Rushmere Heath. Alice previously had her ears cut off for likening queen Mary to Jezebel. The subsequent religious settlement under Elizabeth I helped Woodbridge industries such as weaving, sail-cloth manufacture, rope-making and salt making to prosper, along with the wool trade. The port was enlarged, and shipbuilding and timber trade became very lucrative, so that a customs house was established in 1589.

Around the town there are various buildings from the Tudor, Georgian, Regency and Victorian eras. Woodbridge has a tide mill in working order, one of only two in the UK and among the earliest. The mill first recorded on the site in 1170 was run by the Augustinian canons. In 1536 it passed to King Henry VIII. In 1564, Queen Elizabeth I granted the mill and the priory to Thomas Seckford. In 1577 he founded Woodbridge School and the Seckford Almshouses, for the poor of Woodbridge. Two windmills survive, Buttrum's Mill, and Tricker's Mill. The former is open to the public.

Education and the arts

Woodbridge has a community brass band, the Excelsior, formed in 1846, which makes it the oldest in East Anglia. There is a local radio station. The town also has a two-hectare (5-acre) walled park. Also of interest ecologically are the Quaker Burial Ground and Fen Meadow, 2.67 hectares (7 acres) of traditionally managed grassland.

The town's Deben Leisure Centre and swimming pool were refurbished in 2017–2018 and now provide fuller services since reopening.

There are two Church of England churches: the medieval St Mary's on Market Hill, and the Victorian St John's on St John's Hill.

Woodbridge Quay Church in Quay Street, once known as the Quay Meeting House, took its present form when the town's Baptist and United Reformed congregations merged in 2006. It is now affiliated to the Baptist Union of Great Britain and to the Evangelical Alliance. There is also a Methodist Church in St John's Street, a Salvation Army hall in New Street, and the Roman Catholic Church of St Thomas of Canterbury in St John's Street forms a joint parish with Framlingham. Avenue Evangelical Church is located on the outskirts of Woodbridge. It is affiliated to the FIEC.

The so-called Rendlesham Forest incident took place in nearby Rendlesham Forest in 1980. Unexplained lights were seen in the sky close to RAF Woodbridge, a United States Airforce airfield, and there were claims that a UFO had landed in the forest. The incident continues to interest ufologists and vigorous debates take place between those who believe that an alien spacecraft landed there and the people who offer alternative explanations. 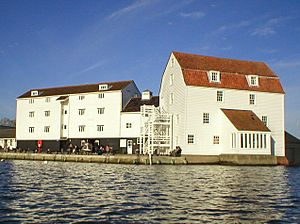 Writers Edward FitzGerald and Anne Knight were born in Woodbridge, and fellow writer Bernard Barton lived in the town in later life.

Other residents of note include musicians Nate James and Charlie Simpson; actors Brian Capron and Nicholas Pandolfi; painter Thomas Churchyard; Director-General of the BBC Ian Jacob; abolitionist John Clarkson; Roy Keane the football manager, and Thomas Seckford, official at the court of Queen Elizabeth I. The clockmaker John Calver lived in the town. Musicians Brian Eno and Brinsley Schwarz were born there. The world's most tattooed man, Tom Leppard, was born in the town. So were the actor Gavin Lee and the footballer Vernon Lewis.

All content from Kiddle encyclopedia articles (including the article images and facts) can be freely used under Attribution-ShareAlike license, unless stated otherwise. Cite this article:
Woodbridge, Suffolk Facts for Kids. Kiddle Encyclopedia.