Brian Eno (born 15 May 1948) is an English musician. He was one of the original members of the band Roxy Music. He makes music called electronic music, which is music made using computers and other electronic devices, like the synthesizer. Brian Eno has worked with other famous musicians and groups like David Bowie and U2. 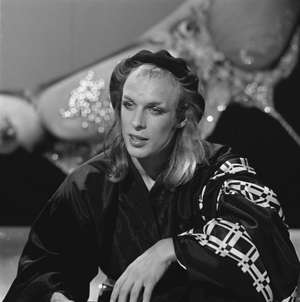 Eno performing on Dutch television in 1974

All content from Kiddle encyclopedia articles (including the article images and facts) can be freely used under Attribution-ShareAlike license, unless stated otherwise. Cite this article:
Brian Eno Facts for Kids. Kiddle Encyclopedia.