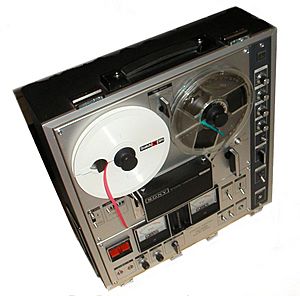 A reel-to-reel tape recorder (Sony TC-630), typical of those which were once common audiophile objects. 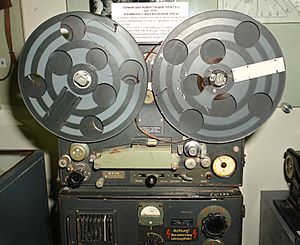 Magnetophon from a German radio station in World War II. 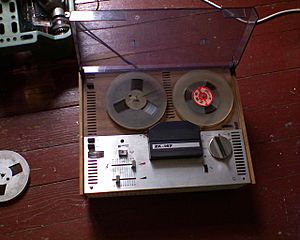 Reel-to-reel tape recorders (often called R2R, Open reel decks, etc.) were used during the 20th century, mostly in professional studios from the 1940’s and quickly spread into people’s homes in the 1950s and 1960s. The biggest popularity was in the 1970s, probably because people needed higher quality recordings. This technology was like a revolution, because everyone could record any kind of sound (vinyl records, radio broadcast, voice and music), then play it many times without the quality getting worse, and they could overwrite it many times. This technology has some weak points though: size of reels, sensibility, durability; but still, it has certain advantages over today’s “digital media formats.” Also, some famous bands and artists used reel to reel technology as a musical instrument or even as a separate band.

These reel to reel decks are usually analogue sound devices using a magnetic tape of ¼ inch (i.e. 6.25 cm) width. This plastic tape is covered by a special magnetic substance which is being made into magnetic domains when it is being recorded. The tape recorder must have a record, playback and an erase head which transfer the signal onto the tape. The more expensive tape decks have three or six separate heads. Tape recorders combine knowledge both on mechanics and electronics. There must be very precise motors and moving parts, but also a complicated circuit board. It has to contain transistors, amplifiers etc.

The usual functions of tape recorders are:

These functions can be handled mechanically (system of rubber belts and metal levers), or electronically (magnets, coils, integrated circuits).

There were many producers during the era of tape recorders, such as Sony, Akai, Revox, Teac, Pioneer, Technics, Tesla and many others. These producers usually had several product series', which were different in price and functions. The best ones had digital programmable counters, reverse mechanic, electronic buttons, they could use big reels (such as 26.5 cm). There was also a big selection of tape producers – Maxell, Basf (Emtec), Quantegy, Agfa, etc.

There were only a few producers of tape recorders in Czechoslovakia. The most important was Tesla, n.p. The main development was realized in Tesla Pardubice, but the mass production was held in Tesla Přelouč. Product numbers were in thousands pieces and tens of model lines. One of the most popular decks was monophonic Tesla Sonet Duo (1959). It was compact, portable and reliable. The collectors of Tesla decks agree that probably the most progressive model was Tesla B73 Hi-Fi Stereo (1978) which provided the principles to the later models. The supreme models were Tesla B115, B116 (1981) and Tesla CM130, CM160 (1986) which were able to compete with similar models made by world’s producers. Still, there were (political) restrictions, so the best ideas and solutions could not be realized. The manufacture finished in 1990 as this technology turned out to be out-of-date.

Tape recorders were one of the ways that you could store digital data. Those with TTL control interface could be handled by special devices and data could be recorded as a sequence of tones of certain frequency. Nowadays, this method is not very good, because the capacity of a reel is usually low.

All content from Kiddle encyclopedia articles (including the article images and facts) can be freely used under Attribution-ShareAlike license, unless stated otherwise. Cite this article:
Reel-to-reel tape recorders Facts for Kids. Kiddle Encyclopedia.