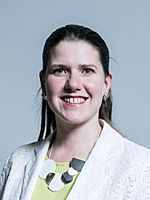 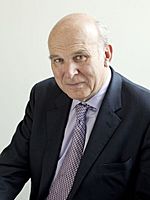 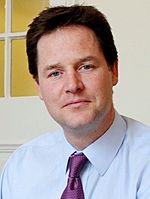 Nick Clegg was the Leader of the Liberal Democrats and was also the Deputy Prime Minister from May 2010 – May 2015.

The Liberal Democrats, often shortened to Lib Dems, is a centrist political party in the United Kingdom that promotes liberal policies. It was started on 2 March 1988 by joining the Liberal Party, which had been a powerful political party in Britain in the 19th and early 20th centuries, and the Social Democratic Party, which had been formed from the Labour Party in 1981. The two parties had already been working together for seven years.

The Liberal Democrats are strong supporters of the European Union, as well as environmentalism and they are in favour of creating a new British House of Commons which is elected using proportional representation.

The party was in a coalition government with the Conservative Party and the former party leader Nick Clegg was the Deputy Prime Minister until the May 2015 general election.

Most Liberal Democrats believe in the following things:

Asterisk (*) means that this person was an interim leader, meaning he was just standing in as leader because the previous leader resigned.

All content from Kiddle encyclopedia articles (including the article images and facts) can be freely used under Attribution-ShareAlike license, unless stated otherwise. Cite this article:
Liberal Democrats Facts for Kids. Kiddle Encyclopedia.