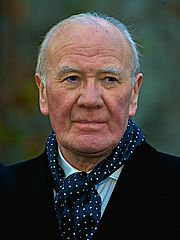 Menzies Campbell was leader of the Liberal Democrats

Walter Menzies "Ming" Campbell, Baron Campbell of Pittenweem CH CBE PC QC (born 22 May 1941 in Glasgow, Scotland) is a British politician and retired sprinter. He was the leader of the Liberal Democrats from March 2006 to October 2007. He is the Member of Parliament (MP) for the constituency of North East Fife and the Chancellor of the University of St Andrews.

Campbell married Elspeth, Lady Grant-Suttie, daughter of Major General Roy Urquhart, in June 1970. The couple have no children. Lady Campbell has a child from her previous marriage.

All content from Kiddle encyclopedia articles (including the article images and facts) can be freely used under Attribution-ShareAlike license, unless stated otherwise. Cite this article:
Menzies Campbell Facts for Kids. Kiddle Encyclopedia.