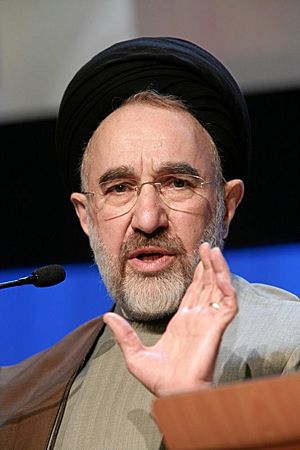 Khatami speaking at the World Economic Forum i 2007

Seyyed Mohammad Khatami (سید محمد خاتمی), (born October 14, 1943) was President of Iran from August 2, 1997 to August 3, 2005 and was followed by Mahmoud Ahmadinejad. Khatami studied Islamic theology in Qom, and philosophy in Isfahan. Khatami built upon the idea of a lawful state, called Rechtsstaat, of democracy and of social equality. He was the first Iranian president to officially do so. These tenets led to conflicts with the government of Iran. Khatami is seen as a reformist. He is currently a prominent supporter of the Iranian Green Movement, and a critic of the government.

All content from Kiddle encyclopedia articles (including the article images and facts) can be freely used under Attribution-ShareAlike license, unless stated otherwise. Cite this article:
Mohammad Khatami Facts for Kids. Kiddle Encyclopedia.