After completing his degree at Sciences Po, a term at Harvard University, and the École nationale d'administration, Chirac began his career as a high-level civil servant, and entered politics shortly thereafter. Chirac occupied various senior positions, including Minister of Agriculture and Minister of the Interior.

Chirac's internal policies initially included lower tax rates, the removal of price controls, strong punishment for crime and terrorism, and business privatisation. After pursuing these policies in his second term as Prime Minister, he changed his views. He argued for more socially responsible economic policies, and was elected President in the 1995 presidential election beating Socialist Lionel Jospin, after campaigning on a platform of healing the "social rift".

He was also known for his stand against the American-led assault on Iraq, his recognition of the collaborationist French Government's role in deporting Jews, and his reduction of the presidential term from 7 years to 5 through a referendum in 2000.

At the 2002 French presidential election, he won 82.2% of the vote against the far-right candidate, Jean-Marie Le Pen. During his second term, however, he had a very low approval rating, and was considered one of the least popular presidents in modern French history.

On 14 July 2002, during Bastille Day celebrations, Chirac survived an assassination attempt by a lone gunman with a rifle hidden in a guitar case. The would-be assassin fired a shot toward the presidential motorcade, before being overpowered by bystanders. The gunman, Maxime Brunerie, underwent psychiatric testing; the violent far-right group with which he was associated, Unité Radicale, was then administratively dissolved.

In July 2006, the G8 met to discuss international energy concerns. Despite the rising awareness of global warming issues, the G8 focused on "energy security" issues. Chirac continued to be the voice within the G8 summit meetings to support international action to curb global warming and climate change concerns. Chirac warned that "humanity is dancing on a volcano" and called for serious action by the world's leading industrialised nations.

Shortly after leaving office, he launched the Fondation Chirac in June 2008. Since then it has been striving for peace through five advocacy programmes: conflict prevention, access to water and sanitation, access to quality medicines and healthcare, access to land resources, and preservation of cultural diversity. It supports field projects that involve local people and provide concrete and innovative solutions. Chirac chaired the jury for the Prize for Conflict Prevention awarded every year by his foundation. 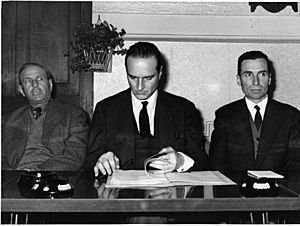 Chirac, born in the Geoffroy Saint-Hilaire clinic, was the son of Abel François Marie Chirac (1898–1968), a successful executive for an aircraft company, and Marie-Louise Valette (1902–1973), a housewife. His great grandparents on both sides were peasants, but his two grandfathers were teachers from Sainte-Féréole in Corrèze. According to Chirac, his name originates from the troubadours. He was a Roman Catholic.

He was educated in Paris at the Cours Hattemer, a private school. He then attended the Lycée Carnot and the Lycée Louis-le-Grand. After his baccalauréat, he served for three months as a sailor on a coal-transporter. 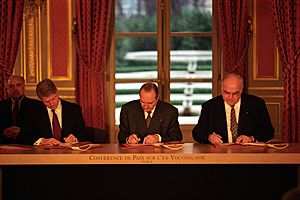 Inspired by General Charles de Gaulle, Chirac started to pursue a civil service career in the 1950s. During this period, he joined the French Communist Party. In 1950, he signed the Soviet-inspired Stockholm Appeal for the abolition of nuclear weapons.

In 1953, after graduating from the Paris Institute of Political Studies, he attended a non-credit course at Harvard University's summer school, before entering the ENA, the Grande école National School of Administration, which trains France's top civil servants, in 1957. 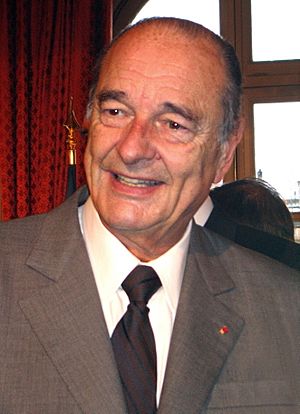 In the United States Chirac worked at Anheuser-Busch in St. Louis, Missouri.

Chirac trained as a reserve military officer in armoured cavalry at Saumur, where he was ranked first in his year. He then volunteered to fight in the Algerian War, using personal connections to be sent despite the reservations of his superiors. His superiors did not want to make him an officer because they suspected he had communist leanings. After leaving the ENA in 1959, he became a civil servant.

In 1956, he married Bernadette Chodron de Courcel, with whom he had two daughters.

For several years he had suffered from memory loss said to be linked to a form of Alzheimer’s disease or to the minor stroke that he had while in office. Chirac had repeated health problems since leaving office in 2007.

All content from Kiddle encyclopedia articles (including the article images and facts) can be freely used under Attribution-ShareAlike license, unless stated otherwise. Cite this article:
Jacques Chirac Facts for Kids. Kiddle Encyclopedia.