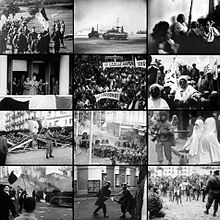 This war led to Algeria gaining its independence from France. Many saw it as a guerrilla warfare and was known for the use of torture. The war took place mainly on the territory of Algeria.

All content from Kiddle encyclopedia articles (including the article images and facts) can be freely used under Attribution-ShareAlike license, unless stated otherwise. Cite this article:
Algerian War Facts for Kids. Kiddle Encyclopedia.