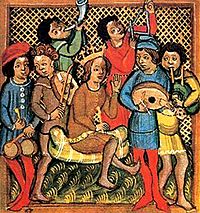 What a troubadour may have looked like in the 14th century

A troubadour was someone who composed and performed Old Occitan lyric poetry during the High Middle Ages. A female troubadour is usually called a trobairitz.

Troubadour songs were mainly about chivalry and courtly love. Many were humorous or vulgar satires. A Troubadour was considered a profession with great honor.

All content from Kiddle encyclopedia articles (including the article images and facts) can be freely used under Attribution-ShareAlike license, unless stated otherwise. Cite this article:
Troubadour Facts for Kids. Kiddle Encyclopedia.