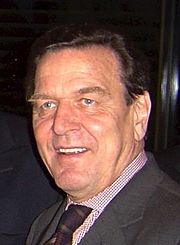 Gerhard Schröder was Chancellor of Germany from 1998 to 2005.

He was born on 7 April 1944 in Mossenberg, North Rhine-Westphalia. After school he learned retail sales in a Lemgo from 1958 to 1961. After that he made his abitur (highest school exam in Germany) in Bielefeld. Then he studied law in Göttingen. After that he worked as a lawyer.

He joined the Social Democratic Party of Germany in 1963 and became chairman of its youth organisation in 1978. In 1986 he became a member of the State Parliament of Lower Saxony. In 1990 he was elected as Prime-Minister of Lower Saxony.

He became the chancellor of Germany in 1998. After elections in 2005, he was replaced by Angela Merkel. He is a member of the SPD (Social Democratic Party of Germany).

All content from Kiddle encyclopedia articles (including the article images and facts) can be freely used under Attribution-ShareAlike license, unless stated otherwise. Cite this article:
Gerhard Schröder Facts for Kids. Kiddle Encyclopedia.