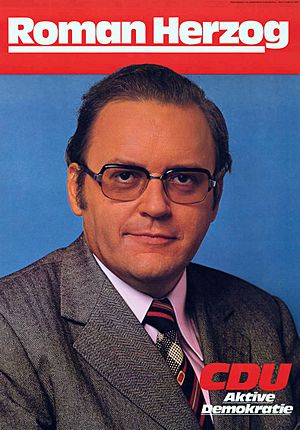 Election poster for the state election of Rhineland-Palatinate with Roman Herzog, 1975

Roman Herzog (5 April 1934 – 10 January 2017) was a German politician, judge and legal scholar, who served as President of Germany from 1994 to 1999. A member of the Christian Democratic Union (CDU), he was the first president to be elected after the reunification of Germany. He previously served as a judge of the Federal Constitutional Court, and he was the President of the court 1987–1994. Before his appointment as a judge he was a professor of law. He received the 1997 Charlemagne Prize.

He studied law in Munich, Bavaria and took the first stage law exam in 1957. In 1958, he gained the title Dr.jur. (doctor of laws) and worked in the University of Munich until 1964, where he passed his second law exam. He wrote Die Wesensmerkmale der Staatsorganisation in rechtlicher und entwicklungsgeschichtlicher Sicht ("Characteristics of State Organization from a Juristic and Developmental-Historical Viewpoint"), and was given the title of professor in 1964. In Germany "professor" is a title meaning senior teacher, not a job name. Herzog taught at the University of Munich until 1966. From 1966 he taught state law and political science as a full professor at the Free University of Berlin (FUB). In 1969 he moved to the FUB in Speyer, and was the University President from 1971 to 1972.

In 1973 he entered politics, and became a member of the Bundesrat for Rhineland-Palatinate. He was minister for culture and sports in the Baden-Württemberg Land Government from 1978. In 1980 he was elected to the State Parliament (Landtag), and took over the state Ministry of the Interior.

All content from Kiddle encyclopedia articles (including the article images and facts) can be freely used under Attribution-ShareAlike license, unless stated otherwise. Cite this article:
Roman Herzog Facts for Kids. Kiddle Encyclopedia.