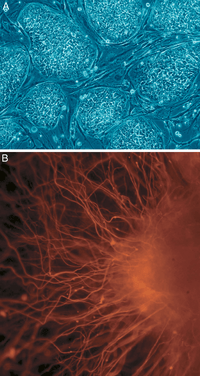 Human embryonic stem cells
A: Cell colonies that are not yet differentiated.
B: Nerve cell

Stem cells are cells of the body (somatic cells) which can divide and become differentiated.

When an organism grows, stem cells specialize, and take specific functions. For instance, mature tissues like skin, muscle, blood, bone, liver, nerves, all have different types of cells. Because stem cells are not yet differentiated, they can change to become some kind of specialized cells. Organisms also use stem cells to replace damaged cells.

Stem cells are found in most, if not all, plants and animals. They divide and differentiate into a range of cell types. Research in the stem cell field grew out of findings in the 1960s.

The two broad types of mammalian stem cells are: embryonic stem cells, and adult stem cells, which are found in adult tissues. In a developing embryo, stem cells can differentiate into all of the specialised embryonic tissues. In adult organisms, stem cells act as a repair system for the body, replenishing specialized cells, but also maintain the normal turnover of blood, skin, and intestinal tissues.

Stem cells can be grown in tissue culture. In culture, they can be transformed into specialised cells, such as those of muscles or nerves. Highly plastic adult stem cells can be taken from a variety of sources, including umbilical cord blood and bone marrow. They are now used in medical therapies, and researchers expect that stem cells will be used in many future therapies. 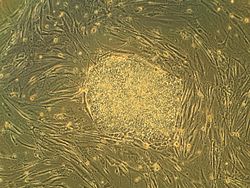 Embryonic stem cells (ES cells) are stem cells taken from the inner cell mass of the early stage embryo known as a blastocyst. Human embryos reach the blastocyst stage 4-5 days after fertilization. At that time, they are made up of between 50 and 150 cells.

The stem cells' state, and what the daughter cells turn into, is influenced by signals from other cells in the embryo.

All content from Kiddle encyclopedia articles (including the article images and facts) can be freely used under Attribution-ShareAlike license, unless stated otherwise. Cite this article:
Stem cell Facts for Kids. Kiddle Encyclopedia.