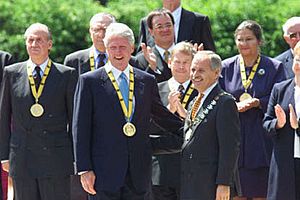 At the award ceremony in 2000 with Bill Clinton. In the background, other prize winners, including Juan Carlos I, Václav Havel and Simone Veil.

The Charlemagne Prize (German: Karlspreis) is a famous prize awarded each year. The prize has been awarded since 1950 by the German city of Aachen. It is awarded to persons who have done outstanding work towards the unification of Europe. The award is named after Charlemagne, emperor of the Frankish Empire, and founder of what became the Holy Roman Empire. Charlemagne lived and was buried in Aachen.

All content from Kiddle encyclopedia articles (including the article images and facts) can be freely used under Attribution-ShareAlike license, unless stated otherwise. Cite this article:
Charlemagne Prize Facts for Kids. Kiddle Encyclopedia.