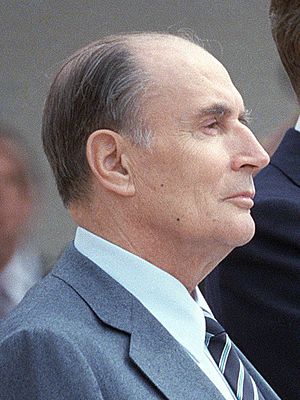 François Maurice Adrien Marie Mitterrand (26 October 1916 - 8 January 1996) was a French politician who served as the President of the French Republic from 21 May 1981 until 17 May 1995. He was born in Jarnac. He was a member of the Socialist Party. Before being elected president, he had held several positions in the French Cabinet. As President of France, he was also one of the Co-Princes of Andorra. Jacques Chirac was President of France and ex officio Co-Prince of Andorra after him. Mitterrand died of prostate cancer in Paris.

All content from Kiddle encyclopedia articles (including the article images and facts) can be freely used under Attribution-ShareAlike license, unless stated otherwise. Cite this article:
François Mitterrand Facts for Kids. Kiddle Encyclopedia.