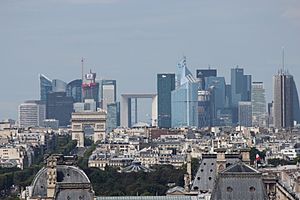 La Défense, as seen from Paris

La Défense is an area in the Paris Metropolitan Area of Île-de-France, located in the Hauts-de-Seine French department, just west of Paris. It is the largest business district in Europe and is home to 19 skyscrapers and more than 50 other buildings made of glass and steel. The area is 1.6 km2 (560 hectares) big. About 25,000 people live in La Défense, and another 180,000 people work there. Over 8 million tourists visit La Défense every year.

To get there, one can start at the Louvre or Arc de Triomphe and head west along the Axe historique (Historical Axis) along the Champs-Élysées and Avenue de la Grande Armée. La Défense is at the other end of the axis and has a monument called Grande Arche. It can also be reached by Paris Métro Line 1, RER Line A, tram T2 run by the RATP, and by SNCF trains, which all stop at an underground railway station called Gare de La Défense.

All content from Kiddle encyclopedia articles (including the article images and facts) can be freely used under Attribution-ShareAlike license, unless stated otherwise. Cite this article:
La Défense Facts for Kids. Kiddle Encyclopedia.