The structure in white is the Grande Arche 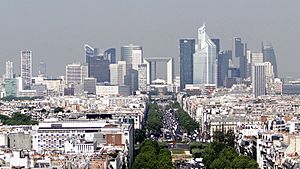 View of the Skyline of La Défense, with the Grande Arche in the center. What shows as green belt is the Axe historique 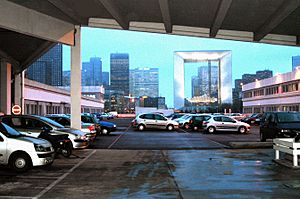 Car par near the Grande Arche 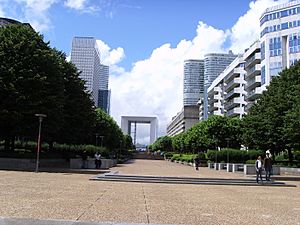 The Grande Arche is a monument that was constructed in La Défense, near Paris, in the 1980s. It is at one end of what is known as axe historique (the other is the Musée du Louvre). It looks like the 3D projection of a tesseract. The Grande Arche was built when François Mitterrand was president. It was opened on 14 July 1989, 200 years after the French Revolution. The Grande Arche houses different offices of the government. There is a terrace at the top, and a space for exhibitions.

All content from Kiddle encyclopedia articles (including the article images and facts) can be freely used under Attribution-ShareAlike license, unless stated otherwise. Cite this article:
Grande Arche Facts for Kids. Kiddle Encyclopedia.