Pyramid of the Louvre facts for kids 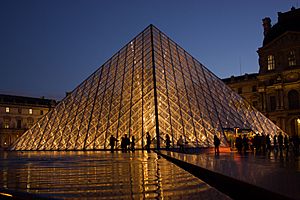 The Louvre Pyramid (Pyramide du Louvre) is a large glass and metal pyramid designed by Chinese-American architect I.M. Pei, surrounded by three smaller pyramids, in the main courtyard (Cour Napoléon) of the Louvre Palace (Palais du Louvre) in Paris. The large pyramid serves as the main entrance to the Louvre Museum. Completed in 1989, it has become a landmark of the city of Paris. 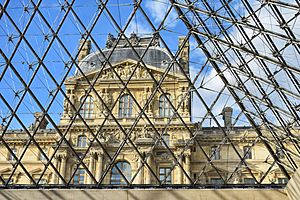 Inside the Pyramid: the view of the Louvre Museum in Paris from the underground lobby of the pyramid.

Commissioned by the President of France, François Mitterrand, in 1984, it was designed by the architect I. M. Pei. The structure, which was constructed entirely with glass segments and metal poles, reaches a height of 21.6 metres (71 ft). Its square base has sides of 34 metres (112 ft) and a base surface area of 1,000 square metres (11,000 sq ft). It consists of 603 rhombus-shaped and 70 triangular glass segments. The pyramid structure was engineered by Nicolet Chartrand Knoll Ltd. of Montreal (Pyramid Structure / Design Consultant) and Rice Francis Ritchie of Paris (Pyramid Structure / Construction Phase).

The pyramid and the underground lobby beneath it were created because of a series of problems with the Louvre's original main entrance, which could no longer handle the enormous number of visitors on an everyday basis. Visitors entering through the pyramid descend into the spacious lobby then ascend into the main Louvre buildings.

For design historian Mark Pimlott, "I.M. Pei’s plan distributes people effectively from the central concourse to myriad destinations within its vast subterranean network... the architectonic framework evokes, at gigantic scale, an ancient atrium of a Pompeiian villa; the treatment of the opening above, with its tracery of engineered castings and cables, evokes the atria of corporate office buildings; the busy movement of people from all directions suggests the concourses of rail termini or international airports."

Several other museums have duplicated this concept, most notably the Museum of Science and Industry in Chicago. The Dolphin Centre, featuring a similar pyramid, was opened in April 1982, by Prince Richard, Duke of Gloucester. The construction work on the pyramid base and underground lobby was carried out by the Vinci construction company.

In 1839, according to one newspaper account, in ceremonies commemorating the "glorious revolution" of 1830, "The tombs of the Louvre were covered with black hangings and adorned with tricolored flags. In front and in the middle was erected an expiatory monument of a pyramidical shape, and surmounted by a funeral vase."

All content from Kiddle encyclopedia articles (including the article images and facts) can be freely used under Attribution-ShareAlike license, unless stated otherwise. Cite this article:
Pyramid of the Louvre Facts for Kids. Kiddle Encyclopedia.