I. M. Pei facts for kids

Ieoh Ming Pei (26 April 1917 – 16 May 2019) was a Chinese American architect. Pei was an important name in his field, with his buildings built all over the world. When he was a child, he learned basic knowledge about architecture from his father. 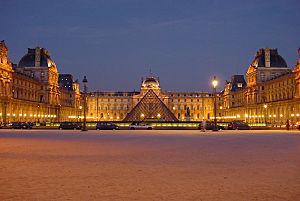 Pei made innovations in architecture, and won the Thomas Jefferson Memorial Medal for Architecture. He built the Allied Bank Tower in Dallas, Texas, as well as the Louvre Pyramid, which is the main entrance to the Louvre Museum in Paris.

All content from Kiddle encyclopedia articles (including the article images and facts) can be freely used under Attribution-ShareAlike license, unless stated otherwise. Cite this article:
I. M. Pei Facts for Kids. Kiddle Encyclopedia.