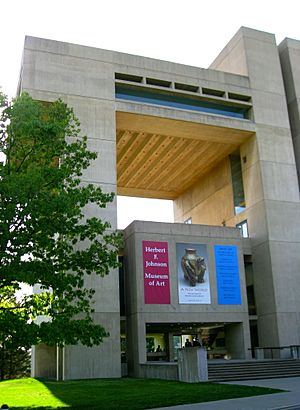 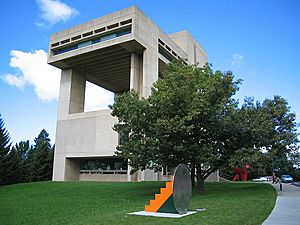 The Herbert F. Johnson Museum of Art ("The Johnson Museum") is an art museum in Ithaca, New York. It is in the Arts Quad on the main campus of Cornell University. It is best known for its unusual concrete facade. The museum has more than 32,000 pieces of art. Each year, over 80,000 people go to the museum. It shows over 20 special exhibitions each year.

Cornell president Deane Waldo Malott started the University Art Museum in 1953. The A. D. White House was changed to hold Cornell's art collections. The current museum was built in 1973. It is named after Herbert Fisk Johnson, Jr.. Johnson was head of S.C. Johnson & Sons of Racine, Wisconsin ("Johnson Wax"). He was a former member of the university's Board of Trustees. He graduated in 1922. His son also served as a trustee.

The Johnson Museum of Art was designed by architect I.M. Pei. Many people say it looks like a sewing machine from the side. Its fifth floor bridges over the open aired sculpture garden. It was made so that it would not block the view of Cayuga Lake. It has a very good view of the lake from its north and west sides. It also has a room for meetings on the sixth floor. This room was used for many years by Cornell's Board of Trustees.

The location of the museum caused many architectural problems. There was a limited amount of space to build. Also, the building could not have a large affect on the view of the lake or the Arts Quad. It is also located on the knoll where tradition said Ezra Cornell chose the site for his university, at the north end of the Stone Row of Morrill, McGraw, and White Halls. The design wanted to visually anchor the north end of Library Slope. The final design was a narrow tower and a bridge. Critics have said it looks like a giant sewing machine.

One part of the design, which was never built, was an underground Asian art gallery. It would have included windows that opened into the Southern face of Fall Creek Gorge.

The building was awarded the American Institute of Architects Honor Award in 1975. The building's design was used on the cover of Scientific American as an early example of computer graphics.

In 2011, a new wing opened to help hold the museum's increasing collection. The new part mirrored the plans drawn up by Pei Cobb Freed & Partners. The architect in charge was John L. Sullivan III. He graduated Cornell in 1962. The 16,000 sq ft (1,500 m2) project cost $22 million. This included some changes to the main building. The money for the project came from large grants from the National Endowment for the Humanities and the Kresge Foundation. The Asian art storage area was moved from the center of the fifth floor to the lower level of the section. This allows them to make the public gallery space on the fifth floor larger. Galleries in the new wing will be used to show contemporary art. The upper level of the new section includes an outdoor Japanese garden. The plans wanted a tunnel under Campus Road to be added. It would have gone through the wall of the Fall Creek gorge. This was not done because of environmental issues.

The permanent collection has more than 32,000 works of art. Most notable is the George and Mary Rockwell Asian Art collection. There are also a large number of works by American artists. These artist include Stuart Davis and Robert Rauschenberg. There is also many works by members of the Hudson River School and the American Impressionists to contemporary art. The Collection of Prints, Drawings, and Photographs has more than 15,000 works. These include works by Berenice Abbott, Robert Frank, Alfred Stieglitz, and Garry Winogrand. The fifth floor observation level holds the museum's large Asian collection. The permanent collection also includes works from Africa, pre-Columbian America, and Oceania. It range from ancient to contemporary societies. Its collection has two windows from Frank Lloyd Wright's Darwin D. Martin House.

Classes for credit are taught by Cornell's academic departments, not by the museum. The museum does work with the teachers. It has gallery sessions for some classes. It also has gallery tours and course-related exhibitions that are run by the faculty. The museum also hosts thematic tours for local school student field trips,. Over 7,000 schoolchildren go to the museum each year. The Johnson Museum Club is a Cornell student group that promotes student awareness of the Johnson Museum's collections, exhibitions, and resources. It hosts concerts, scavenger hunts and other events.

All content from Kiddle encyclopedia articles (including the article images and facts) can be freely used under Attribution-ShareAlike license, unless stated otherwise. Cite this article:
Herbert F. Johnson Museum of Art Facts for Kids. Kiddle Encyclopedia.