Cayuga Lake  is the longest of central New York's glacial Finger Lakes, and is the second largest in surface area (marginally smaller than Seneca Lake) and second largest in volume. It is just under 40 miles (64 km) long. Its average width is 1.7 miles (2.7 km), and it is 3.5 mi wide (5.6 km) at its widest point near Aurora. It is approximately 435 ft deep (133 m) at its deepest point.

The lake is named after the native Cayuga people.

The city of Ithaca, site of Ithaca College and Cornell University, is located at the southern end of Cayuga Lake.

The lake has two small islands. One is near Union Springs; Frontenac Island( North East). This island is not inhabited. The other island, Canoga Island (North West) is located near the town of Canoga. This island has several camps and is inhabited during the summer months. The only other island in any of the Finger Lakes is Squaw Island in Canandaigua Lake. 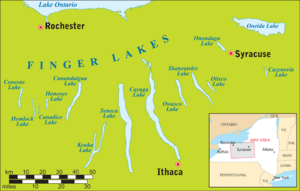 Map of the Finger Lakes

The water level is regulated by the Mud Lock at the north end of the lake. It is connected to Lake Ontario by the Erie Canal and Seneca Lake by the Seneca River. The lake is drawn down as winter approaches, to minimize ice damage and to maximize its capacity to store heavy spring runoff.

The north end is dominated by shallow mudflats. An important stopover for migratory birds, the mudflats and marsh are the location of the Montezuma National Wildlife Refuge. The southern end is also shallow and often freezes during the winter. 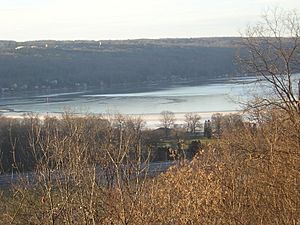 Winter view of the head of Cayuga Lake

Cayuga Lake is very popular among recreational boaters. The Allan H. Treman State Marine Park, a large state marina and boat launch, is located at the southern end of the lake in Ithaca. There are two yacht clubs on the western shore: Ithaca Yacht Club a few miles north of Ithaca, and Red Jacket Yacht Club just south of Canoga. There are several other marinas and boat launches scattered along the lake shore.

Cayuga Lake is the source of drinking water for several communities, including Lansing near the southern end of the lake along the east side, which draws water through the Bolton Point Municipal Water system. There are also several lake source cooling systems that are in operation on the lake, whereby cooler water is pumped from the depths of the lake, warmed, and circulated in a closed system back to the surface. One of these systems, which is operated by Cornell University and began operation in 2000, was controversial during the planning and building states for potential negative environmental impact. All the environmental impact reports and scientific studies have shown that the Cornell lake source cooling system has not yet had and will not likely have any measurably significant environmental impact. Furthermore, Cornell's system pumps significantly less warm water back into the lake than others further north which have been operating for decades, including the coal-fired power plant on the eastern shore. 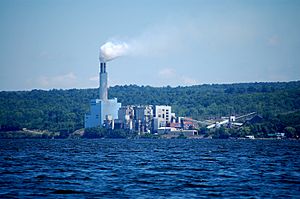 AES Cayuga, on the eastern shore of the lake

The AES Coal Power plant was shut down in August 2019 and there are plans to convert it into a data center in the near future. The plant used to use Cayuga Lake as a cooling source. In the late 1960s, citizens successfully opposed the construction of an 830-MW nuclear power plant on the shore of Cayuga Lake.

Rod Serling named his production company Cayuga Productions during the years of his TV series, The Twilight Zone. Serling and his family had a summer home at Cayuga Lake.

Inflow is represented by Cayuga Inlet, Fall Creek, Taughannock Creek, and Salmon Creek, while it outflows into Seneca River and other tributaries.

The lake is the subject of local folklore.

An Ithaca Journal article of January 5, 1897 reported that a sea serpent, nicknamed "Old Greeny," had been sighted in Cayuga Lake annually for 69 years. A sighting in that month described the animal, 200 feet from shore, as "large and its body long," though a "tramp" suggested it was a muskrat. In 1929, two creatures, about 12 to 15 feet in length, were reportedly spotted along the eastern shore of the lake. Further sightings were reported in 1974 and 1979.

Cornell's alma mater makes reference to its position "Far Above Cayuga's Waters", while that of Ithaca College references "Cayuga's shore".

A tradition at Wells College in Aurora holds that if the lake completely freezes over, classes are canceled (though for only one day). According to Wells College records, this most recently happened in 1979 and 2015. However, other sources suggest that the only time the entire lake froze over solid end to end in the 20th century was in 1912.

Cayuga Lake, like nearby Seneca Lake, is also the site of a phenomenon known as the Guns of the Seneca, mysterious cannon-like booms heard in the surrounding area. Many of these booms may be attributable to bird-scarers, automated cannon-like devices used by farmers to scare birds away from the many vineyards, orchards and crops. There is however no proof of this.

Cayuga Lake is included in the American Viticultural Area with which it shares its name. Established in 1988, the AVA now boasts over a dozen wineries, four distilleries, a cidery, and a meadery.

All content from Kiddle encyclopedia articles (including the article images and facts) can be freely used under Attribution-ShareAlike license, unless stated otherwise. Cite this article:
Cayuga Lake Facts for Kids. Kiddle Encyclopedia.