A rainbow trout is a species (kind) of fish. It is farmed in some places. Like all trouts, it is related to Salmon. It can be found almost everywhere. The rainbow trout is one of many different kinds of trout. It is called a rainbow trout because its scales are colorful and shiny.

Resident freshwater rainbow trout adults average between 1 and 5 lb (0.5 and 2.3 kg) in riverine environments, while lake-dwelling and anadromous forms may reach 20 lb (9 kg). Rainbow trout is also called a redband trout and have coloring and patterns that vary widely depending on habitat,age,and spawning conditions.

Adult freshwater forms are generally blue-green or olive green with heavy black spotting over the length of the body. Adult fish have a broad reddish stripe along the lateral line, from gills to the tail, which is most pronounced in breeding males.

The caudal fin is squarish and only mildly forked. Lake-dwelling and anadromous forms are usually more silvery in color with the reddish stripe almost completely gone.

In many regions, hatchery-bred trout can be distinguished from native trout via fin clips. Fin clipping the adipose fin is a management tool used to identify hatchery-reared fish.

Rainbow trout, including steelhead forms, generally spawn in early to late spring (January to June in the Northern Hemisphere and September to November in the Southern Hemisphere) when water temperatures reach at least 42 to 44 °F (6 to 7 °C). The maximum recorded lifespan for a rainbow trout is 11 years.

Freshwater resident rainbow trout usually inhabit and spawn in small to moderately large, well oxygenated, shallow rivers with gravel bottoms. They are native to the alluvial or freestone streams that are typical tributaries of the Pacific basin, but introduced rainbow trout have established wild, self-sustaining populations in other river types such as bedrock and spring creeks. Lake resident rainbow trout are usually found in moderately deep, cool lakes with adequate shallows and vegetation to support production of sufficient food sources. Lake populations generally require access to gravelly bottomed streams to be self-sustaining.

Spawning sites are usually a bed of fine gravel in a riffle above a pool. A female trout clears a redd in the gravel by turning on her side and beating her tail up and down. Female rainbow trout usually produce 2000 to 3000 4-to-5-millimetre (0.16 to 0.20 in) eggs per kilogram of weight. During spawning, the eggs fall into spaces between the gravel, and immediately the female begins digging at the upstream edge of the nest, covering the eggs with the displaced gravel. As eggs are released by the female, a male moves alongside and deposits milt (sperm) over the eggs to fertilize them. The eggs usually hatch in about four to seven weeks although the time of hatching varies greatly with region and habitat. Newly hatched trout are called sac fry or alevin. In approximately two weeks, the yolk sac is completely consumed and fry commence feeding mainly on zooplankton. The growth rate of rainbow trout is variable with area, habitat, life history and quality and quantity of food. As fry grow, they begin to develop "parr" marks or dark vertical bars on their sides. In this juvenile stage, immature trout are often called "parr" because of the marks. These small juvenile trout are sometimes called fingerlings because they are approximately the size of a human finger. In streams where rainbow trout are stocked for sport fishing but no natural reproduction occurs, some of the stocked trout may survive and grow or "carryover" for several seasons before they are caught or perish.

The oceangoing (anadromous) form, including those returning for spawning, are known as steelhead in Canada and the U.S. In Tasmania they are commercially propagated in sea cages and are known as ocean trout, although they are the same species.

Like salmon, steelhead return to their original hatching grounds to spawn. Similar to Atlantic salmon, but unlike their Pacific Oncorhynchus salmonid kin, steelhead are iteroparous (able to spawn several times, each time separated by months) and make several spawning trips between fresh and salt water, although fewer than 10 percent of native spawning adults survive from one spawning to another. The survival rate for introduced populations in the Great Lakes is as high as 70 percent. As young steelhead transition from freshwater to saltwater, a process called "smoltification" occurs where the trout undergoes physiological changes to allow it to survive in sea water. There are genetic differences between freshwater and steelhead populations that may account for the smoltification in steelheads.

Juvenile steelhead may remain in the river for one to three years before smolting and migrating to sea. Individual steelhead populations leave the ocean and migrate into their freshwater spawning tributaries at different times of the year. Two general forms exist—"summer-run steelhead" and "winter-run steelhead". Summer-run fish leave the ocean between May and October, before their reproductive organs are fully mature. They mature in fresh water while en route to spawning grounds where they spawn in the spring. Summer-run fish generally spawn in longer, more inland rivers such as the Columbia River. Winter-run fish are ready to spawn when they leave the ocean, typically between November and April, and spawn shortly after returning to fresh water. Winter-run fish generally spawn in shorter, coastal rivers typically found along the Olympic Peninsula and British Columbia coastline, and summer-run fish are found in some shorter, coastal streams. Once steelhead enter riverine systems and reach suitable spawning grounds, they spawn just like resident freshwater rainbow trout.

Rainbow trout are predators with a varied diet and will eat nearly anything they can capture. They are not as piscivorous or aggressive as brown trout or chars. Rainbow trout, including juvenile steelhead in fresh water, routinely feed on larval, pupal and adult forms of aquatic insects (typically caddisflies, stoneflies, mayflies and aquatic diptera). They also eat fish eggs and adult forms of terrestrial insects (typically ants, beetles, grasshoppers and crickets) that fall into the water. Other prey include small fish up to one-third of their length, crayfish, shrimp, and other crustaceans. As rainbow trout grow, the proportion of fish consumed increases in most populations. Some lake-dwelling forms may become planktonic feeders. In rivers and streams populated with other salmonid species, rainbow trout eat varied fish eggs, including those of salmon, brown and cutthroat trout, mountain whitefish and the eggs of other rainbow trout. Rainbows also consume decomposing flesh from carcasses of other fish. Adult steelhead in the ocean feed primarily on other fish, squid and amphipods. 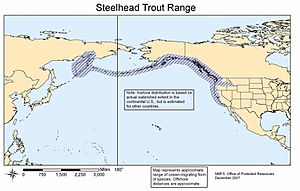 Native range of steelhead, the anadromous form of O. mykiss

The native range of Oncorhynchus mykiss is in the coastal waters and tributary streams of the Pacific basin, from the Kamchatka Peninsula in Russia, east along the Aleutian Islands, throughout southwest Alaska, the Pacific coast of British Columbia and southeast Alaska, and south along the west coast of the U.S. to northern Mexico. It is claimed that the Mexican forms of Oncorhynchus mykiss represent the southernmost native range of any trout or salmon (Salmonidae), though the Formosan landlocked salmon (O. masou formosanus) in Asia inhabits a similar latitude. The range of coastal rainbow trout (O. m. irideus) extends north from the Pacific basin into tributaries of the Bering Sea in northwest Alaska, while forms of the Columbia River redband trout (O. m. gairdneri) extend east into the upper Mackenzie River and Peace River watersheds in British Columbia and Alberta, Canada, which eventually drain into the Beaufort Sea, part of the Arctic Ocean. Since 1875, the rainbow trout has been widely introduced into suitable lacustrine and riverine environments throughout the United States and around the world. Many of these introductions have established wild, self-sustaining populations. 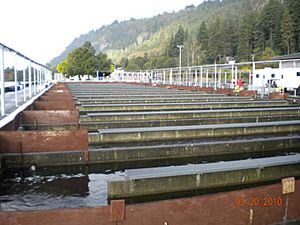 Since 1870, rainbow trout have been artificially propagated in fish hatcheries to restock streams and to introduce them into non-native waters. The first rainbow trout hatchery was established on San Leandro Creek, a tributary of San Francisco Bay, in 1870, and trout production began in 1871. The hatchery was stocked with the locally native rainbow trout, and likely steelhead of the coastal rainbow trout subspecies (O. m. irideus). The fish raised in this hatchery were shipped to hatcheries out of state for the first time in 1875, to Caledonia, New York, and then in 1876 to Northville, Michigan. In 1877, another California rainbow trout hatchery, the first federal fish hatchery in the National Fish Hatchery System, was established on Campbell Creek, a McCloud River tributary. The McCloud River hatchery indiscriminately mixed coastal rainbow trout eggs with the eggs of local McCloud River redband trout (O. m. stonei). Eggs from the McCloud hatchery were also provided to the San Leandro hatchery, thus making the origin and genetic history of hatchery-bred rainbow trout somewhat diverse and complex. In the U.S., there are hundreds of hatcheries operated by the U.S. Fish and Wildlife Service and various state agencies and tribal governments propagating rainbow trout for conservation and recreational sport fishing. Six of ten Canadian provinces have rainbow trout farms, with Ontario leading production. 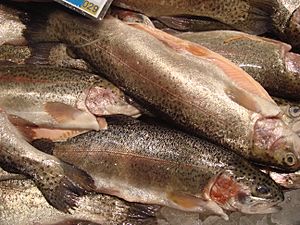 Rainbow trout, cleaned and iced, in a fish market in Western Australia

Rainbow trout are commercially farmed in many countries throughout the world. The practice began in the late 19th century, and since the 1950s commercial production has grown dramatically. Worldwide, in 2007, 604,695 tonnes (595,145 long tons; 666,562 short tons) of farmed rainbow trout were harvested with a value of about US$2.6 billion. The largest producer is Chile. In Chile and Norway, sea cage production of steelhead has expanded to supply export markets. Inland production of rainbow trout to supply domestic markets has increased in countries such as Italy, France, Germany, Denmark and Spain. Other significant trout-producing countries include the U.S., Iran, the United Kingdom, and Lesotho. While the U.S. rainbow trout industry as a whole is viewed as ecologically responsible, trout raised elsewhere are not necessarily farmed with the same methods.

About three-quarters of U.S. production comes from Idaho, particularly the Snake River area, due in part to the quality and temperature of the water available there. California and Washington also produce significant numbers of farmed trout. In the east, Pennsylvania, North Carolina and West Virginia have farming operations. Rainbow trout farming is one of the largest finfish aquaculture industries in the U.S. They are raised inland in facilities where raceways or ponds have continuously flowing water with little pollution and a low risk of escape. The U.S. industry is noted for using best management practices. Imports constitute only about 15 percent of farmed rainbows sold in the U.S., and nearly all domestic production is consumed within the country; very little is exported. The U.S. produces about 7 percent of the world's farmed trout. Rainbow trout, especially those raised in farms and hatcheries, are susceptible to enteric redmouth disease. A considerable amount of research has been conducted on redmouth disease, given its serious implications for rainbow trout farming. The disease does not infect humans.

All content from Kiddle encyclopedia articles (including the article images and facts) can be freely used under Attribution-ShareAlike license, unless stated otherwise. Cite this article:
Rainbow trout Facts for Kids. Kiddle Encyclopedia.