Cayuga Inlet is a river located in Tompkins County, New York. It flows into the south end of Cayuga Lake by Ithaca, New York.

Cass Park is located along Cayuga Inlet. The Cayuga Waterfront Trail is a 5.5 mile multi-use trail which runs through Cass Park along the banks of Cayuga Inlet. The trail connects joggers and cyclists to Stewart Park, the Farmer's Market, Newman Golf Course, and other destinations in the area. 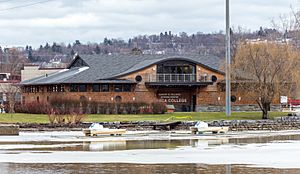 Cornell University's Collyer Boathouse is located on the east bank of the Cayuga Inlet, just north of where Six Mile Creek drains into the inlet.

Hydrilla verticillata, a highly invasive species also known as water thyme, was detected in the Cayuga Inlet in August 2011. It had not been found in Cayuga Lake. A project began in 2012-2013 to eradicate hydrilla from the inlet.

All content from Kiddle encyclopedia articles (including the article images and facts) can be freely used under Attribution-ShareAlike license, unless stated otherwise. Cite this article:
Cayuga Inlet Facts for Kids. Kiddle Encyclopedia.