Aurora, or Aurora-on-Cayuga, is a village and college town in the town of Ledyard, Cayuga County, New York, United States, on the shore of Cayuga Lake. The village had a population of 724 at the 2010 census.

Wells College, an institution of higher education for women founded by Henry Wells in 1868, is located in Aurora. It became coeducational in 2005, and since then enrollment has risen.

In 1980, its Aurora Village-Wells College Historic District, with more than 50 contributing properties, was listed on the National Register of Historic Places. From 2001 to 2007, redevelopment of historic properties in the village by entrepreneur Pleasant Rowland and the Aurora Foundation earned compliments, as well as provoking citizen concern, a lawsuit joined by state and national preservation organizations, and national media attention. 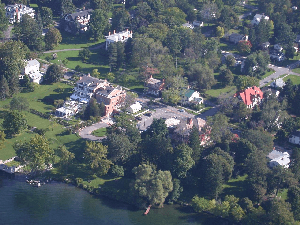 Indigenous peoples occupied the lakeshore and riverways in present-day New York for thousands of years. Prior to European-American settlement, a major Cayuga Indian village, Chonodote, stood near the present-day site of Aurora village. It had permanent dwellings and the people cultivated fields for their staple crops of varieties of corn, beans and squash. Chonodote was destroyed by the Sullivan Expedition in 1779 during the Revolutionary War, when the Cayuga were allies of the British army, in retaliation for raids by Joseph Brant and his Mohawk and Loyalist forces mostly in the eastern Mohawk Valley. Most of the Cayuga went with other Iroquois nations to Canada, where their descendants are enrolled in the Six Nations Reserve. Some members of the Cayuga tribe returned to the area after the war, but the tribe had been forced to cede its land to New York. They were left landless and shared space with the Seneca on their reservation that once included the north end of Cayuga Lake.

Part of the village was within the Central New York Military Tract. The United States reserved this portion to pay off veterans with deeds to land after the Revolutionary War. The tract was part of the five million acres (20,000 km²) of lands which the Iroquois were forced to cede in the 1794 Treaty of Canandaigua. Many veterans from New England settled in the Finger Lakes area, as did some migrants from the Mohawk and Hudson valleys.

During the 19th century, Aurora developed as a minor center for manufacturing. A stopping point for canal traffic after the Cayuga–Seneca Canal opened, the village was incorporated in 1837. It became a port, shipping produce from farmers in the region up Cayuga Lake, then by the Erie Canal to other major markets. Academies and seminaries for basic education were established in 1800. Notable schools include Cayuga Lake Academy, which was founded in 1797 and chartered by the New York State Regents in 1801. Its second structure, built in 1835, remained until it was destroyed by fire on April 19, 1945. Many prominent graduates attended the school, including President Millard Fillmore, William Brookfield, the founder of the Bushwick Glass Works; and William E. Leffingwell (1855–1927), State Assemblyman and founder of the Glen Springs Sanitarium. In 1868 Henry Wells founded Wells College for the education of women.

With changes in transportation, development of the Midwest, and other economic shifts, local agriculture declined in importance. The village is a local center with well-preserved buildings composing the Aurora Village–Wells College Historic District, listed on the National Register of Historic Places. It has come to rely on Wells College as the major employer. During the school year, nearly half the population of the village is made up of students. Since the renovations in the town and the college's 2005 decision to enroll men and become co-educational, enrollment has increased. The student body, with enrollment of 567 in 2007, had increased by a third since a few years ago.

Also listed on the National Register of Historic Places are the Aurora Steam Grist Mill (1976) and Mosher Farmstead (2003).

In December 2005, the S.H.A.R.E. (Strengthening Haudenosaunee-American Relations through Education) Farm was signed over to the Cayuga Nation of New York by US citizens who had purchased and developed the 70-acre (280,000 m2) farm in Aurora, New York. This is the first substantial property which the Cayuga Nation has owned since after being forced to cede its lands after the Revolutionary War. Settlement here has meant their first chance to live within the borders of their ancestral homeland in more than 200 years.

According to the United States Census Bureau, the village has a total area of 0.92 square miles (2.38 km2), all of it land.

There were 181 households, out of which 52 had children under the age of 18 living with them, 91 were married couples living together, 13 had a female householder with no husband present, and 75 were non-families. 63 of all households were made up of individuals, and 33 had someone living alone who was 65 years of age or older. The average household size was 2.33 and the average family size was 3.10.

The population was 62.3% female, and 37.7% male, due to the college which has mostly female students.

All content from Kiddle encyclopedia articles (including the article images and facts) can be freely used under Attribution-ShareAlike license, unless stated otherwise. Cite this article:
Aurora, Cayuga County, New York Facts for Kids. Kiddle Encyclopedia.