Cayuga County is a county in the U.S. state of New York. As of the 2010 census, the population was 80,026. Its county seat and largest city is Auburn. The county was named for the Cayuga people, one of the tribes of Indians in the Iroquois Confederation.

When counties were established in the Province of New York in 1683, the present Cayuga County was part of Albany County. This was an enormous county, including the northern part of the present state of New York and all of the present state of Vermont and, in theory, extending westward to the Pacific Ocean. This county was reduced in size on July 3, 1766 by the creation of Cumberland County, and further on March 16, 1770, by the creation of Gloucester County, both containing territory now in Vermont.

On March 12, 1772, what was left of Albany County was split into three parts, one remaining under the name Albany County. One of the other pieces, Tryon County, contained the western portion (and thus, since no western boundary was specified, theoretically still extended west to the Pacific). The eastern boundary of Tryon County was approximately five miles west of the present city of Schenectady, and the county included the western part of the Adirondack Mountains and the area west of the West Branch of the Delaware River. The area then designated as Tryon County now includes 37 counties of New York State. The county was named for William Tryon, colonial governor of New York. In the years prior to 1776, most of the Loyalists in Tryon County fled to Canada. In 1784, following the peace treaty that ended the American Revolutionary War, the name of Tryon County was changed to Montgomery County in honor of the general, Richard Montgomery, who had captured several places in Canada and died attempting to capture the city of Quebec, replacing the name of the hated British governor.

In 1789, Montgomery County was reduced in size by the splitting off of Ontario County. The actual area split off from Montgomery County was much larger than the present county, also including the present Allegany, Cattaraugus, Chautauqua, Erie, Genesee, Livingston, Monroe, Niagara, Orleans, Steuben, Wyoming, Yates, and part of Schuyler and Wayne Counties. Harriet Tubman visited Auburn, New York, located in Cayuga County, in 1887 with her daughter (adopted) and her 2nd husband.

Herkimer County was one of three counties split off from Montgomery County (the others being Otsego and Tioga Counties) in 1791.

Onondaga County was formed in 1794 by the splitting of Herkimer County.

Cayuga County is located in the west central part of the state, in the Finger Lakes region. Owasco Lake is in the center of the county, and Cayuga Lake forms part of the western boundary. Lake Ontario is on the northern border, and Skaneateles Lake and Cross Lake form part of the eastern border. Cayuga County has more waterfront land than any other county in the state not adjacent to the Atlantic Ocean. 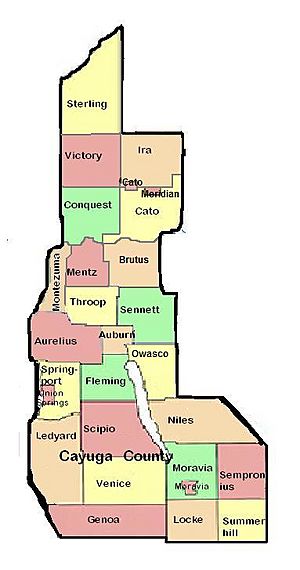 A map of the towns and villages in Cayuga County 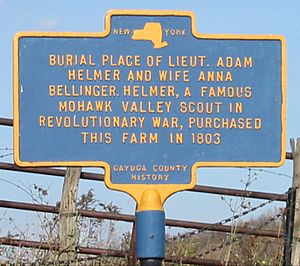 Marker at the burial site of Helmer and his wife on the north side of Cottle Road in the Town of Brutus, New York. Their grave stones were moved to the Weedsport Rural Cemetery.

All content from Kiddle encyclopedia articles (including the article images and facts) can be freely used under Attribution-ShareAlike license, unless stated otherwise. Cite this article:
Cayuga County, New York Facts for Kids. Kiddle Encyclopedia.