The 24th congressional district of New York includes all of Cayuga, Onondaga, and Wayne counties, and the western part of Oswego County. Its largest city is Syracuse.

This district is currently represented by Republican John Katko. As of the 117th United States Congress, it is one of very few Democratic-leaning districts in the country to be represented by a Republican, and one of only nine districts that voted for Joe Biden in the 2020 presidential election while being held or won by a Republican. Katko had also won re-election in 2016 while the district was carried by Democrat Hillary Clinton.

From 2003 to 2013, the district included all or parts of Broome, Cayuga, Chenango, Cortland, Herkimer, Oneida, Ontario, Otsego, Seneca, Tioga, and Tompkins counties.

Components: Past and Present

Historically, most of this district was located Upstate, However, over the years

In 2008, Michael Arcuri won the election with 130,799 votes (9,454 from Working Families Party line) to Richard L. Hanna's 120,880 out of 282,114 total votes. Note that in New York State electoral politics there are several minor parties at various points on the political spectrum. Certain parties will invariably endorse either the Republican or Democratic candidate for every office, hence the state electoral results contain both the party votes, and the final candidate votes (Listed as "Recap"). 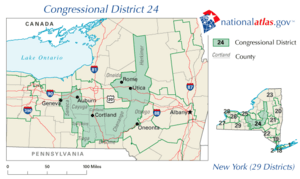 All content from Kiddle encyclopedia articles (including the article images and facts) can be freely used under Attribution-ShareAlike license, unless stated otherwise. Cite this article:
New York's 24th congressional district Facts for Kids. Kiddle Encyclopedia.