Kids Encyclopedia Facts
Not to be confused with Hamilton, New York or Hamilton (village), New York.

Hamilton County is a county in the U.S. state of New York. As of the 2010 census, the population was 4,836, making it New York's least populous county. Its county seat is Lake Pleasant. The county is named after Alexander Hamilton, the only member of the New York State delegation who signed the United States Constitution in 1787 and later the first United States Secretary of the Treasury. The county was created in 1816 and organized in 1847.

For the history of Hamilton County prior to 1816, see Montgomery County, New York.

On April 12, 1816, Hamilton County was created by partitioning 1,800 square miles (4,700 km2) from Montgomery County, but due to low population it remained unorganized and administered from Montgomery County, N.Y. until it was recognized as sufficiently prepared for self-government on January 1, 1838. The organization process was completed by summer 1847.

On April 6, 1860, Fulton County was partitioned, with 10 square miles (26 km2) of land in Sacandaga Park transferred to Hamilton County. On May 24, 1915, land was swapped between Hamilton and Essex counties, with Hamilton ceding Fishing Brook Mountain for Indian Lake. Hamilton gained an additional 20 square miles (52 km2), whereas Essex County lost 30 square miles (78 km2). This left Hamilton with its present size of 1,830 square miles (4,700 km2).

The former town of Gilman was dissolved in 1860. The original county seat was Sageville, now part of Lake Pleasant. 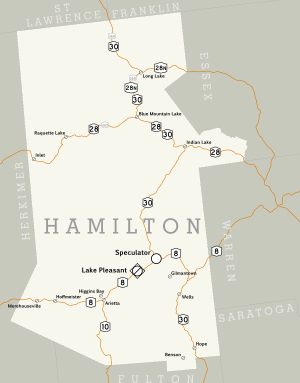 All content from Kiddle encyclopedia articles (including the article images and facts) can be freely used under Attribution-ShareAlike license, unless stated otherwise. Cite this article:
Hamilton County, New York Facts for Kids. Kiddle Encyclopedia.