Herkimer County is a county in the U.S. state of New York. As of the 2010 census, the population was 64,519. Its county seat is Herkimer. The county was created in 1791 north of the Mohawk River out of part of Montgomery County. It is named after General Nicholas Herkimer, who died from battle wounds in 1777 after taking part in the Battle of Oriskany during the Revolutionary War. 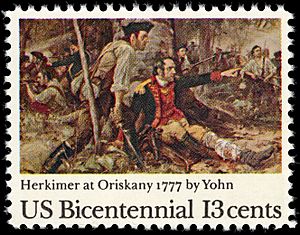 General Nicholas Herkimer, commander at the Battle of Oriskany in 1777 and namesake of Herkimer County

In 1791, Herkimer County was created as one of three counties split off from Montgomery (the other two being Otsego and Tioga counties) as New York State was developed after the American Revolutionary War. Its area was much larger than the present county, however, and was reduced subsequently as more counties were organized.

Part of Herkimer County was included in the Macomb's Purchase of 1791, during the wide-scale sale of public lands after the state forced Iroquois tribes allied with the British during the war to cede their territory. Suddenly the state was selling 5 million acres (20,000 km2) of land in upstate, central and western New York.

In 1794, Onondaga County was split off from Herkimer County. This county was larger than the current Onondaga County, and included the present Cayuga, Cortland, and part of Oswego counties.

In 1798, portions of Herkimer and Tioga counties were taken to form Chenango County.

Another part of Herkimer was split off to form Oneida County. It was then larger than the current Oneida County, including the present Jefferson, Lewis, and part of Oswego counties.

In 1802, parts of Herkimer, Clinton and Montgomery counties were combined to form the new St. Lawrence County.

The following public use airport is located in the county:

All content from Kiddle encyclopedia articles (including the article images and facts) can be freely used under Attribution-ShareAlike license, unless stated otherwise. Cite this article:
Herkimer County, New York Facts for Kids. Kiddle Encyclopedia.